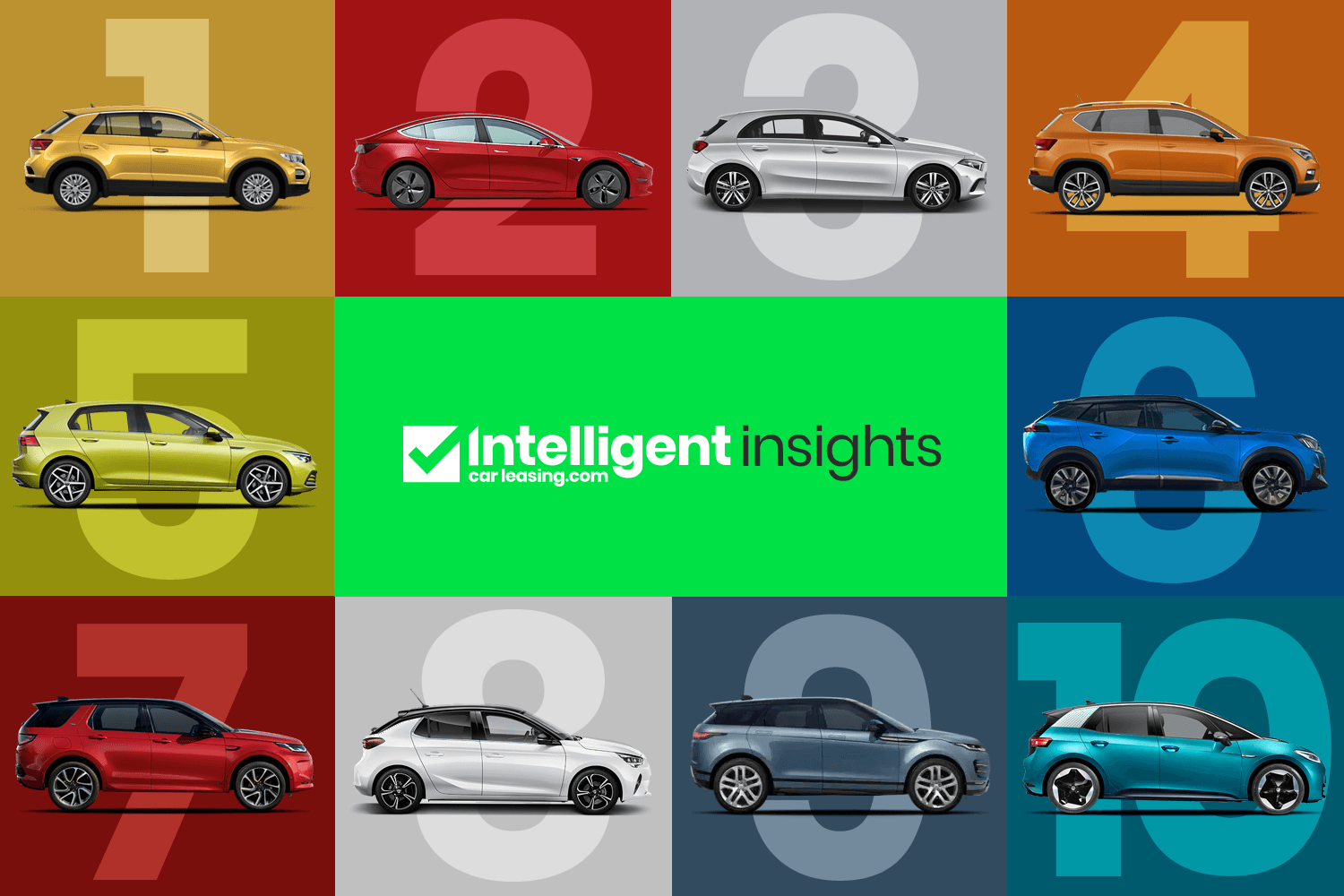 Our Top 10 most popular cars to lease

As part of our ‘Intelligent Insights’ series, we’ve run an analysis of the most popular models between January and March 2021 based on the vehicle choices of Intelligent Car Leasing customers.

Our Q1 list features some perennial favourites and a surprise new newcomer. So let’s jump right in:

Volkswagen dominates our Q1 popularity chart with three out of the 10 most popular models. The T-Roc takes the prime position due to a winning combination of good looks, SUV practicality and premium badge. And whilst it’s compact, it offers more space than its direct rivals – a compelling mix that our customers obviously find appealing.  The Golf finds itself in fifth place, which is expected really, given that it’s a perennial favourite. Rounding out trifecta is Volkswagen’s new ID.3 EV which breaks into the top 10 after just six months on the market – proof that the electric revolution is well and truly upon us.

Despite the ID.3’s rapid popularity, it’s still overshadowed by its main EV competitor, the Tesla Model 3 which rides high in second place. The Model 3 has been dominating sales figures around the world and has been our most popular electric vehicle for a few years now. The question is, with premium-badge manufacturers like Volkswagen and Mercedes really upping their EV game, can Tesla hold on to its EV crown for much longer?

Mercedes and SEAT are well represented in our top 10 with the A-Class (no surprise there) in third place and the Ateca in fourth. The Ateca’s popularity makes sense given that it’s basically a more affordable version of the Volkswagen Tiguan with a sprinkling of SEAT’s usual Iberian flair.

Then we have the classic combo of Peugeot and Vauxhall in sixth and ninth places respectively. Peugeot has really upped its game with the stunning 208 and its larger – and evidently more popular – sibling the 2008 SUV. On the back of their recent resurgence, Peugeot has seen fit to rebrand as part of its shift towards a new era of electric car manufacturing.

Vauxhall’s Corsa is an ever-present sight on UK roads and driveways and it continues to prove popular with our customers. Vauxhall and Peugeot are now partners in the larger PSA group alongside Citroen and DS and as such the new Corsa shares its underpinnings with the Peugeot 208 – no bad thing considering its multi-award-winning credentials.

Then we have luxury brand Land Rover who make a strong showing with two models in positions seven and nine. The Discovery Sport and the Evoque sit at opposite ends of the SUV spectrum. The ‘compact’ Evoque offers sleek looks, whilst the Disco Sport is boxier, yet still appealing, and offers oodles of space. Whatever your tastes, practicality doesn’t come more up-market than these two models.

Here’s how our top 10 most popular models compare by volume:

Let’s do a run-down of those models with a little extra insight based on customer preference: A great-looking SUV with a premium badge and lots of space. No one ever goes wrong choosing a Volkswagen. 35% of customers opted for the rather tasty Black Edition which features black privacy glass and black alloys for that stealthy look. If you’re considering an electric vehicle and can afford it, the Model 3 is at the top of most choice lists. 76% of customers opted for the Long Range version to really maximise the Model 3’s already impressive range. The A-Class is a permanent fixture on our popularity lists. 54% of customers chose the A-Class saloon and 85% of all A-Class orders were for the hybrid 250e variant – just goes to prove that customers are embracing electrification in some form. Whilst a little late to the party, the Ateca has proven very popular with SUV types. 100% of customers opted for the EVO SE Technology spec which offers larger alloys, an upgraded infotainment system and smartphone app connectivity. The Golf is one of the UK’s most popular mid-sized family cars. It’s also incredibly popular with business drivers. This is likely why 100% of the Golf’s we’ve leased to customers in Q1 have been diesel – despite the decline in diesel sales overall. Peugeot really is on a winning streak with their new 208 and 2008 models. However, the 2008 SUV has proved more popular no doubt due to its practicality. 86% of customers opted for the GT spec which offers toys such as a larger touchscreen, wireless phone charging and heated front seats. The vast majority of Discovery Sport customers opted for the 2WD drive base model. And why not? The Discovery Sport offers a premium experience across its entire model range, so even the entry-level is an exceptionally rewarding drive. The Corsa comes in a bewildering array of engine and trim combinations, however, the majority of customers opted for the SE Premium spec. The new Corsa is the best yet, with an impressive amount of spec even at lower trim levels. No wonder it’s a common sight on UK roads. The Evoque has been super-popular with our customers since it launched. 67% of customers opted for diesel which suggests that it’s still one of the most attractive and comfortable choices when it comes to driving long journeys. The new kid on the block and already proving popular. Built from the ground up as an electric-only vehicle, it’s the same size as a Golf, but ditching the traditional engine has enabled VW to configure a longer cabin that offers Passat-levels passenger space. Supremely practical and economic.

If you’re looking for an exceptional car leasing deal on some of the 1000s of other vehicles we have available, view our latest special offers.

This entry was posted in Intelligent Insights on May 20, 2021 by Kevin Blackmore