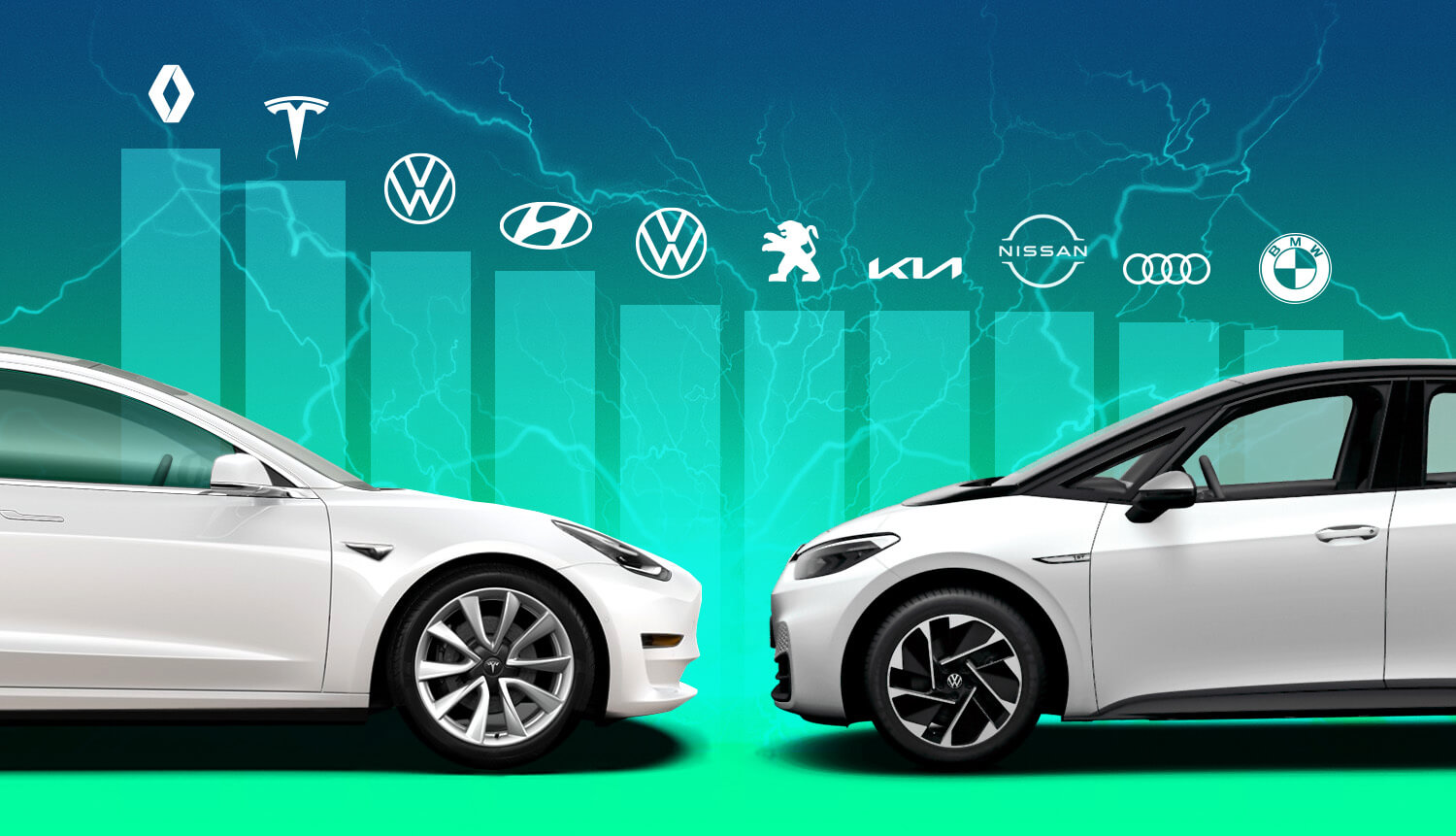 Tesla under pressure as challenger car brands pitch for its crown

It’s easy to understand why Tesla is considered the biggest EV player in Europe. Elon Musk and the brand has made the electric vehicle (EV) an object of desire, a technological tour de force and, well, very cool. Talk EVs and inevitably you talk Tesla.

But while Tesla dominates the EV conversation, if you thought it did the same in the sales charts you’d be wrong.

In fact, the Tesla Model 3 wasn’t even the best-selling EV – that accolade went to Renault and its delightful Zoe model with the Model 3 in second and VW’s ID.3, which only went on sale in the latter half of 2020, in third place.

And the pressure on Tesla is going to intensify as new car makers muscle in on the EV market. Some you will have heard of; others not. Here’s our guide to the challenger brands that want your charging lead slotted into their charging socket.

You might have heard of the Nio brand because the company has recently launched its ET7 saloon, which not only featured autonomous driving technology but had a claimed battery range of 700km – that’s 435 miles – while the Extended Range model has a 1000km range (620 miles). Wow! But before you get too juiced up, that’s using the Chinese NEDC method – using the stricter WLTP measurement used in Europe it will be more like 300-350 miles.

Anyway, the good news is that the NIO brand is on its way to Europe so you can expect it in the UK by 2022. The other notable thing about the NIO brand is that they make cars available without batteries in China. NIO calls this Battery-As-A-Service (BAAS) which drivers can subscribe to, and swap battery capacity when they need (all battery packs are the same size, they just contain different numbers of cells). A NIO battery swap takes minutes. Whether that will come to the UK remains to be seen. Renault tried it and the concept failed – was it too early? Perhaps. Could NIO change that? Quite possibly.

Fisker eco-luxury from the US

Fisker is an American brand from the West Coast and it’s highly enviro-conscious. The Fisker Ocean, an all-electric luxury SUV with a 250-mile range, is claimed to be the most sustainable vehicle to date, featuring carpets constructed of regenerated nylon, for example, made from abandoned fishing net waste pulled from the oceans.

The first Fisker Experience Centre is due to open in London in 2022 with the Ocean SUV being built by Magna International in Europe, which should you be concerned, also makes cars for BMW, Daimler, Jaguar Land Rover and Toyota.  The Fisker Ocean SUV could give a whole new meaning to the term ‘going green’. A big welcome to Genesis, the upmarket brand from Hyundai. Launching this spring in the UK, Genesis will launch with the G70 saloon, a rival for the Audi A4 and BMW 3 Series. Currently, the brand only has petrol and diesel engines, but don’t expect that to last. Hyundai’s electric sub-brand IONIQ will provide the basis for an all-electric Genesis challenger pretty soon. Here’s another Chinese brand that wants to follow in the same zero-emission tyre tracks as Tesla: Xpeng or Xiaopeng Motors. It’s certainly ambitious having only produced its first vehicle in 2018. But Xpeng has already ventured outside its national borders and has been selling its G3 SUV into Norway, before considering further European expansion (although the company is already talking openly of building vehicles in Europe). It also has the P7 with one of the longest driving ranges in China (claimed to be more than 700km – 435 miles on the older NEDC measurement). Expect more news of where Xpeng expands into Europe by early summer.

Byton is a Chinese startup with plenty of ambition to take on Europe and Tesla – but it shows you how difficult it is to match Tesla. The M-Byte SUV was launched at the Frankfurt show in 2019 with plans to roll out European operations in the second quarter of 2021, starting in Zurich, Switzerland. However, plans went awry midway through last year as the effects of the pandemic and lack of funds saw Byton suspend operations for six months. If you were hoping to lease the M-Byte, with its massive 48-inch driver display, then you might have to wait just a little longer than anticipated.

OK, enough of the Chinese startups for a moment – what about one from Europe, from Spain to be precise? Welcome Cupra, the all-new sporty brand of VW-owned SEAT. The company has already launched its own brand-specific model, the Formentor, which is a plug-in hybrid, but the El-Born will go one step further – a full performance hot hatch with zero emissions. While 0-62mph times have still to be revealed, Cupra has said the vehicle will blast to 31mph in 2.9 seconds, which is plenty fast enough away from the lights. There’s a claimed range of 310 on a full charge. Expect to see lease deals on this car soon. Romania’s Dacia – EV on a budget

Dacia has carved itself an enviable reputation for no-frills exceptional value for money. The budget Romanian brand of Renault is starting to expand beyond its petrol and diesel staple, though, with the announcement of the Spring Electric. While Dacia says the car will not go on sale in the UK – it will be available across Europe – which is a shame because Dacia says it will be the most affordable EV on the market. Nevertheless, Dacia has plans to bring more electrification to the brand, such as the great-looking Dacia Bigster Concept, while still maintaining exceptional value for money.

MG might well have escaped your notice, but MG Motor UK, owned by the giant SAIC Chinese carmaker – has been establishing a real foothold for electric vehicles in the UK. And while they might not appeal to the Tesla driver, the MG ZS electric SUV and the MG5 estate EV have helped propel MG to become the fastest growing car brand in the UK. If you’re looking to lease an MG, then the ZS EV has a range of 163 miles and MG5 EV has a range of 214 miles and lease rentals are highly competitive. Well, Japanese carmaker Mazda has truly travelled under the radar with its fabulous looking coupe-styled MX-30 all-electric SUV. As you would expect from Mazda, the MX-30 is beautifully detailed and has been selling as a 500 off First Edition model. But April 2021 will see the range expand to include SE-L Lux, Sport Lux and GT Sport Tech specifications to lease. Currently, the MX-30 has a 35.5kWh lithium-ion battery that delivers a range of 124 miles. That’s hardly Tesla-busting range, but perfectly fine for most journeys (the average is just 8.4 miles) with the advantage that the battery can be juiced up quickly with a rapid charger or just five hours with a 7kWh home wall charger.

This entry was posted in Car Product News/Reviews on February 17, 2021 by Marc Murphy