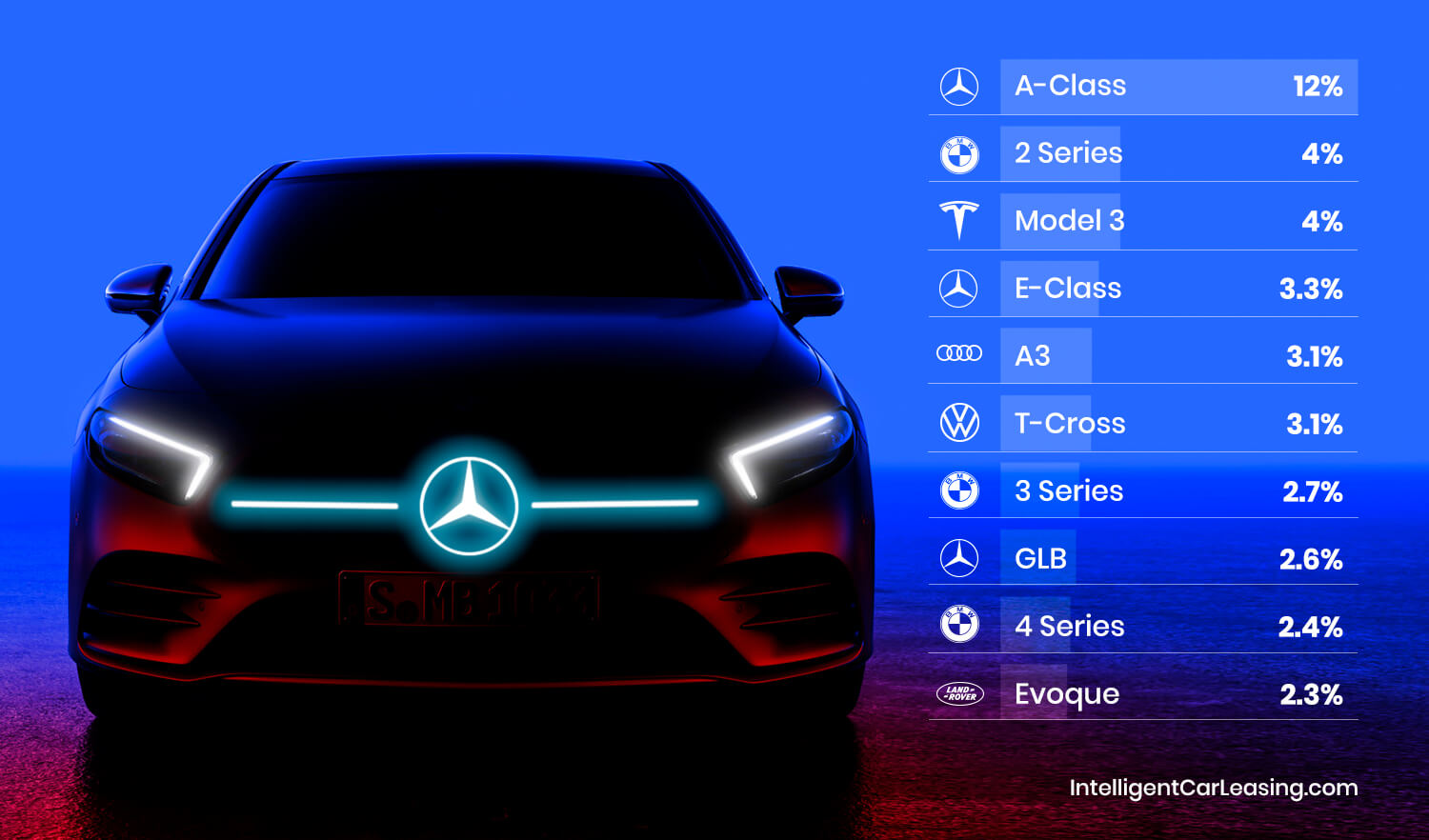 Mercedes is top of the charts, but where’s the all-electric A-Class?

There’s no question, 2020 has been a challenging year.  But despite the pandemic, we’ve found that the desire to lease a car is stronger than ever. For those of us who can’t work from home or work for an essential service, the daily commute is as real in 2020 as it was last year.

That got us thinking – has the pandemic altered people’s tastes or needs when it comes to transport? Are we looking to downsize the budget by jumping into a smaller car, or are we turning to larger SUVs to manage the less frequent – and larger – supermarket shop?

What exactly were our car tastes in 2020?

The rise and rise of the A-Class

An analysis of the IntelligentCarLeasing.com top 10 models that have generated the most enquiries year to date in 2020 reveals what we have come to expect – that premium German models dominate and there’s growing interest in leasing an electric car.

Accounting for an impressive 12% of all enquiries, the Mercedes-Benz A-Class is the car that most interests IntelligentCarLeasing.com customers. And it’s no wonder. A respected premium brand, with a reputation for superbly engineered luxury, the A-Class is a great looker and a cost-effective entry point for those interested in driving the famous three-pointed star.

It’s a compelling package. And the launch of the latest fourth-generation has rocketed the A-Class up the UK popularity stakes helping the A-Class record the largest registration increase across all competing models in 2019.

It suggests that while consumers still want a car, an SUV is not their first choice. What they do want, at the right price point in such an unsettled economy, is a premium badge. And the A-Class fits that requirement perfectly.

But if we are seeing a change in consumer tastes (still premium but a compact car rather than an SUV), the pandemic has also changed our driving habits. Annual mileage has fallen from 9200 a year in 2002 to a projected average of just 6970 in 2020 – that’s a significant 25% drop.

This reducing mileage trend coupled with the Government’s ban on the sale of petrol and diesel vehicles from 2030, means electric vehicles are now the future of transport, and manufacturers are producing EVs (Electric Vehicles) at breakneck speed. The Tesla Model 3’s joint second place in our top 10 list illustrates the burgeoning interest in electric vehicles.

As the vehicle market rapidly evolves around us, where does the A-Class feature in the automotive electric future? If we break down our A-Class enquiries by body and fuel type we see some interesting trends.

The A-Class Hatchback accounted for 68.5% of all A-Class enquiries, with the Saloon variant taking the remaining 31.5%.

Mercedes launched a plug-in electric hybrid (PHEV) model, the A250e in 2019 and it’s clear that the A-Class saloon is what most eco-conscious drivers are interested in with 55.9% of all A-Class saloon enquires choosing the plug-in hybrid, compared to just 3.5% for the hatchback.

With the proven popularity of an electrified A-Class and so many competing manufacturers announcing EV versions of their most popular models, the obvious question is: where is the all-electric A-Class? Its absence is made all the more confounding by the fact that the A-Class has always been Mercedes’ go-to model for technological experimentation.

A brief A-Class history and the curious tale of Tesla

Starting life in 1997, the A-Class was Mercedes’ first foray into the compact market. The original A-Class wasn’t much of a looker by today’s model’s standards and was more akin to today’s Smart Forfour – another brand owned by Mercedes parent Daimler AG.

It wasn’t until its third-generation, launched in 2012, that the A-Class came to resemble what we know and love today. The larger third-generation model was restyled to appeal to younger owners and was an instant hit.

The fourth and current version was launched in 2018, complete with its unique ‘predator face’ styling that Mercedes say will remain unique to the A-Class.

The popularity of the A-Class is obvious. However, it has a lesser-known history as a technological trailblazer, which makes the absence of a current-generation all-electric A-Class all the more curious. In 2002, Mercedes chose the first-generation A-Class to host its pioneering F-Cell hydrogen fuel cell technology. Launched as a limited production vehicle, it was the world’s first production hydrogen fuel-cell vehicle to be supplied to customers.

Whilst not a production vehicle in the truest sense of the word, with just 60 F-Cell vehicles leased to customers around the world, it did possess a usable range of 250 miles.

From its pioneering A-Class beginnings to the current generation GLC version – billed as the world’s first electric vehicle with a fuel cell/battery powertrain – the F-CELL has helped Mercedes cement its position as an innovator in the hydrogen fuel cell space. In 2010, Mercedes chose the second-generation A-Class to host its modern foray into battery electric vehicle technology. The E-CELL project was designed to allow Mercedes to collect real-world data on family battery-electric vehicles. A limited production of 500 cars was produced as a trial and leased to select customers in Europe.

With a range of 120 miles, the E-CELL offered respectable range at the time as – despite the smaller size of the second generation A-Class – it was still regarded as a family five-seater.

Curiously, the powertrain in the A-Class E-CELL was developed by Tesla. The battery technology was also used in the first-generation Smart Fortwo Electric Drive – now known as the Smart EQ ForFour.

Tesla CEO Elon Musk has even stated that the partnership with Mercedes’ parent company Daimler was crucial to the technology company’s early survival:

“If we hadn’t done that…Tesla would have died because the Daimler partnership gave us credibility, that a major OEM was willing to work with us, and they also paid us for the [Smart Electric Drive 2] development program which is really helpful from a revenue standpoint. Without that investment, Tesla would have been game over”. Since the E-CELL, Mercedes has launched its fully electrified EQ range, the plug-in hybrid EQ Power range and the mild-hybrid EQ Boost range.

Currently, the fully electric range is limited to the EQA crossover based on the second-generation GLA crossover (coming soon), the EQC SUV mid-range 4×4 and the EQV, an electric MPV.

However, Mercedes has also promised us an EQS luxury model, an EQE executive saloon (plus SUV variants) and the larger family hatch EQB.

But the A-Class hatch appears to have been left in the petrol and diesel hinterland.

Since 2002, Mercedes-Benz has used the A-Class as a study for testing the vehicle drive of the future. We reckon it’s time to stop using the A-Class as a test-case and launch an honest-to-goodness battery-electric A-Class – and not just the crossover version.

Our data suggests IntelligentCarLeasing.com customers would be all over it!

If you fancy an A-Class, but don’t want to wait for an all-electric model, check out our current Mercedes A-Class offers.

This entry was posted in Electric Car News on November 30, 2020 by Kevin Blackmore