In a new survey conducted by Intelligent Car Leasing it is revealed that more than double the amount of men admit to having used a mobile phone whilst driving than women. Also surfacing is the fact that motorists in the 18-24 year old and 25-34 year old age brackets make up an overwhelming majority of those who admit to using a mobile phone while in control of a vehicle.

By asking 1000 individuals the question ‘Have you held a mobile phone whilst driving in the last 30 days?’ the British public reveal some very interesting facts about their driving habits which strongly overlap with a lot of hot road safety issues today.

Asking the question ‘Have you held a mobile phone’ may seem strange but that action can also be worthy of points on your licence as one motorist in Ireland found out. Plus as the police are all too aware most drivers will claim that they were “only holding their phone” when getting pulled over on the road.

In addition, some other studies have asked drivers “have you ever used a mobile phone whilst driving”, which is technically also asking people about pre-2003 days as well when it was legal to do so. Therefore we wanted to be completely accurate and only publish data which is relevant.

Government looking to increase penalties for mobile phone use whilst driving

Just recently it has been announced that the government is reviewing plans to increase the amount of points for using a mobile phone whilst in control of a vehicle from 3 points to 6.

This comes after calls came from Sir Bernard Hogan-Howe who is the commissioner of the Metropolitan Police to implement the change. If implemented this would mean that the consequences for being caught using a mobile phone would be much more severe; with two offences in three years being enough to merit licence revocation. This would be even worse for new drivers who lose their licence if accruing 6 or more points within 2 years of passing their test.

This has proven to be a popular move as a YouGov poll conducted for the Sunday Times showed that 73% of drivers are in favour of the move.

With a sample of 1000 people we are able to reveal some very interesting trends between different motoring demographics and paint a picture of how we in the UK use mobile phones whilst driving.

Out of all responses 67.7% of participants claim they had not held a mobile phone whilst driving in the last 30 days, 6.2% say they had and 26.1% note that they do not drive.

Some other interesting insights can be seen below:

Men more likely to use mobile phones whilst driving. 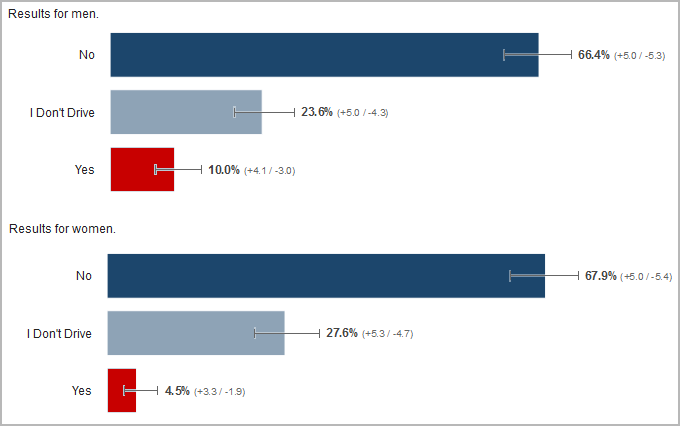 Men are more than double as likely to use a mobile phone while driving according to our data. Whilst we did anticipate some sort of difference between the sexes, a gap of 122% was not expected.

This results is less surprising in that the majority of those who admit to using a mobile phone while in control of a vehicle are younger drivers, those who are actually least likely to lease a car. A number of factors could be in play here including confidence in driving abilities, naivety and the fact that younger people are more inclined to use mobile devices in general (see the RAC’s thoughts on this issue below).

More people admitting to offences than in official government figures.

The government conducted an extensive observational survey of English drivers in 2009 to ascertain the levels of mobile phone usage in drivers. In this research it was published that hand-held mobile phones were used by only 1.4% of drivers. So the published data from our anonymous survey here goes to show that the problem is actually worse than the government is able to officially confirm.

As well as gathering information on research that has already been published we spoke first hand to Sarah Rice spokeswoman for the RAC to get the organisation’s opinions on some of the issues at hand.

Q. Driving whilst using a mobile phone can be a dangerous activity, the government is considering doubling the penalty points for motorists being caught doing so. Do you think this decision would have an impact on motorists’ decisions with regards to mobile phone usage if passed?

A. Increasing licence points may act as a deterrent in the short term, but if there is no improved enforcement behind it then the move is unlikely to change behaviour in the long run. Disturbingly, the RAC’s Report on Motoring 2014 showed that half of motorists (51%) think it’s unlikely drivers will ever get picked up for texting while stopped in traffic. Only 18% believe motorists are likely to be taken to task with the rest (22%) uncertain as to whether they will or they won’t. Only three in 10 motorists (29%) think drivers will get into trouble for texting on the move while 42% think it is unlikely. As a result, 60% of motorists surveyed for the report believe there are insufficient numbers of police officers on the roads to enforce driving laws. It’s time we made mobile phone use behind the wheel as socially unacceptable as drinking and driving and, while it could be a good start, it will take a lot more than increasing penalty points for those who are caught.

Q. Our research indicates that men are more than twice more likely to use a mobile phone whilst driving than women. Do you think there are any underlying reasons for this?

A. From this year’s Report on Motoring, we found that 34% of motorists rated mobile phone use as a serious concern. We know that just having the phone in the car is a key cause of distraction. In fact, 19% of both women and men usually keep their mobile phone available next to them while driving. 51% of men keep their phone in their pocket while driving and 56% of women keep their phone in their bag. We also know that 45% of company car owners connect with Bluetooth. The average for this across the population is 15% and this is higher in men (22%).

Q. Our survey indicates younger motorists are much more likely to use a mobile phone whilst driving, with those in the 18-24 and 25-34 age bracket making up the majority of the ‘Yes’ responses. Why do you think this might be?

A. Mobile phones are now an intrinsic part of our lives, and as a national we have become addicted to them. Ofcom in fact has warned we are a nation of ‘phone addicts’ unable to go without checking our phones even for very short periods of time. Over a third of adults (37%) and 60% of teens admit they are addicted to their phones. 16% of 17 to 24-year-olds admit they lose concentration from texting. Younger people have certain personality differences to their older counterparts. They are more prone to sensation seeking and impulsivity. They are also more likely to be influenced by external influences such as their peer group. Young people are also more likely to be affected by alcohol, drug, fatigue and distraction-based impairments, such as mobile phone use. This helps explain why the risk of crash involvement for a newly qualified 17-year-old is almost twice as high as for a newly qualified 60-year-old.

Q. Safety is obviously a big part of what the RAC covers in its day to day operations. Given you’ve released data on mobile phone usage whilst driving before is this an area you’re keen to keep an eye on in future?

A. Mobile phone use while driving is a key concern for all road safety campaigners. The research for the 2014 RAC report on Motoring demonstrates the continuing need for greater awareness of the dangers of drivers using mobile phones and texting regardless of whether their vehicle is stationary or on the move. As part of our ongoing interest in this area, the RAC has called on those accountable for enforcing the current laws on the use of hand-held phones whilst driving to do so more effectively. This must be supported by a high profile Government-funded Roads Safety campaign that makes using a hand-held mobile phone at the wheel as socially unacceptable as drinking and driving. Our aim is to keep this on the agenda until the risks are dramatically reduced.

How this affects us on the roads

Obviously we know that using a mobile phone whilst driving can be dangerous, but how much risk does it actually put us at is a question that needs posed.

THINK Road Safety claims that drivers are four times more likely to crash when using a mobile phone whilst driving. This is based on claims that reaction times are 50% less fast than when under normal driving conditions.

The Transport Research Laboratory has conducted extensive research into the effects of using a mobile device while driving using their DigiCar Simulator. One notable experiment involved 17 young drivers aged between 17 and 24. Shockingly this experiment revealed that when writing a text message drivers’ reaction times were slowed by 35%, which is almost three times as much as being at the legal drink drive limit which was found to increase reaction times by 12%.

This is clearly a serious issue as statistics released by the Department of Transport show that using mobile devices whilst driving is set to be the biggest killer in 2015.

However surprisingly a study of over 1500 people by the RAC this year found that 12% of drivers don’t know that it’s illegal to text message whilst driving and 21% think it is within the law to check social media updates. This lack of knowledge about what is and isn’t within the law is frightening and means that a simple lack of awareness could be putting motorists at serious risk.

Taking into consideration the lack of awareness highlighted above we may well see a number of campaigns by government bodies to better educate motorists on the rules in the near future.

We kindly ask that you attribute www.intelligentcarleasing.com when referencing or redistributing the results of this study in any way.

This entry was posted in Reports & Research on July 29, 2014 by Marc Murphy