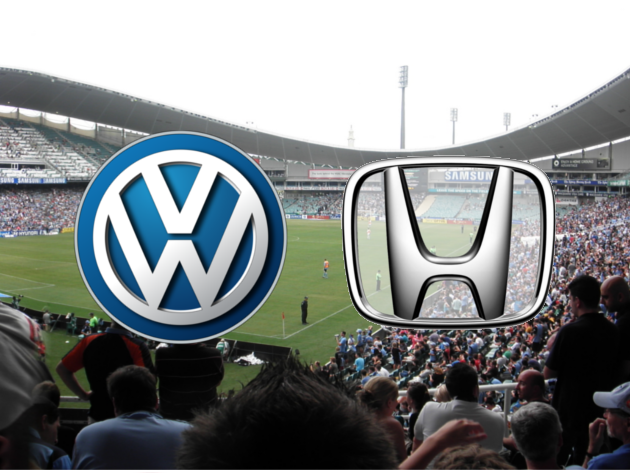 With a car leasing market that has never been more competitive and billions of pounds at stake, it’s no wonder that automobile manufacturers are throwing boat loads of cash at their advertising campaigns. Over the years, such investment has served up some truly memorable adverts – but the internet is currently saturated with more “Top 10 Car Advert” compilations than you can shake a gear stick at.

In an effort to put an innovative twist on such a list, we’ve created a car advert World Cup, of sorts. Featuring one advert from one manufacturer from each country, it’s a straight quarter-final knockout tournament, listing the best eight commercials (and ergo, the best car-making boffins which came up with them)… So without further ado, let the games begin!

This 2011 advert from Korean automotive giants Hyundai capitalised on the growing preoccupation with global warming and environmentally-friendly automobiles by playing up the green qualities of its new range. Subverting our preconceptions about everyday mundanities such as the emotions of animals and the colour of roses, the advert challenges us to view cars (and in particular Hyundai models) in a new light. What’s more, it’s set against a delightful original piano composition from Vanessa James, which provides the perfect foil.

Long before the UK populace became obsessed with “The Great British Bake Off”, Škoda dazzled the advertising world with this culinary masterpiece for their 2007 Fabia model. With Julie Andrews’ “My Favourite Things” playing in the background, a crack team of chefs-cum-mechanics assemble a complete car created entirely out of edible sponges, fruits and spreads. Truly one of the best car adverts of all time, Škoda (and indeed those Czechs) didn’t finish higher up on the pecking order quite simply for the dearth of other quality commercials coming out of the country.

The film “Bullitt” is widely regarded as one of the best chase movies in existence. Knowing this, the clever clogs at Ford decided to take advantage of its already immense success and splice real footage of the film – including many cooler-than-cool takes of Steve McQueen himself – along with video of their new Ford Puma model. The result? An advert that makes you want to be McQueen, be with McQueen or, more likely, just own a Ford Puma. Of course, the States also has a wide array of other manufacturers, including Chrysler, Dodge and General Motors, many of which have produced great adverts too… so they only just missed out on the semis by the skin of their teeth.

Despite being home to a plethora of luxury car brands such as Ferrari, Maserati and Lamborghini, as well as more affordable models like Alfa Romeo, it’s the humble Fiat which takes the cake for best Italian ad, for our money. Unlike other car manufacturers, Fiat almost invariably concentrate on their nationality… or on sex… or, more often than not, both. In this unreasonably lengthy advert from the States, Fiat theorise that every model of their 500L series comes with a backseat Italian family, free of charge.

It was a close call between Renault and Citreön for who would fly the flag for the French, but in the end the cool vehicular version of Optimus Prime break-dancing to Les Rythmes Digitales’ ‘Jacques Your Body (Make Me Sweat)’ won the day. Fun fact for all the movie buffs out there – the man behind the advert is none other than Neill Blomkamp, who would go on to direct the blockbusters “District 9” and “Elysium”. If only the real Transformer films were as entertaining as this! (Rejoinders and refutations welcome in the comments section below).

This series of ads from the early 2000s might not be to everyone’s taste, but you’ve got to give ailing mini-car manufacturer Mini its dues for thinking outside of the box. After all, which advertising executive dreamt up the idea of having two elderly naked people hit a third nude with a comically-sized fish in order to sell their cars? We’d like to buy that man a pint. Other gems from the series include zombies becoming “bored” and “wandering off” due to the hardiness of the Mini’s outer shell and, from later in the decade, a bulldog ingratiating himself to an unmanned Mini.

VOLKSWAGEN “SINGING IN THE RAIN” (Germany)

Everyone knows Gene’s Kelly’s classic song and dance in a downpour in the film of the same name – Volkswagen knows that everyone knows this. Therefore, what better way to access their market than use the latest new-fangled techniques of CGI to add in some highly implausible break dance moves to old Gene’s repertoire? Backflips, spaghetti legs and robotic movements abound in this creative take on an old classic, thus illustrating VW’s point that their Golf is still the original, but has been updated.

Germany may be the football champions of the world, but when it comes to car adverts, the Japanese have that title locked down. Not even including the fantastic work done by Mazda, Mitsubishi, Nissan and Toyota, Honda have by far and away the most impressive range of adverts. As well as the similarly creative “Paper” and “Hands”, the lyrically perfect “Hate Something, Change Something…” and the magically inspiring “The Impossible Dream”, Honda are also responsible for the finest car advert of all time – “The Cog”. Need we say more?

This entry was posted in Fun Car Stuff on November 10, 2015 by Kevin Blackmore