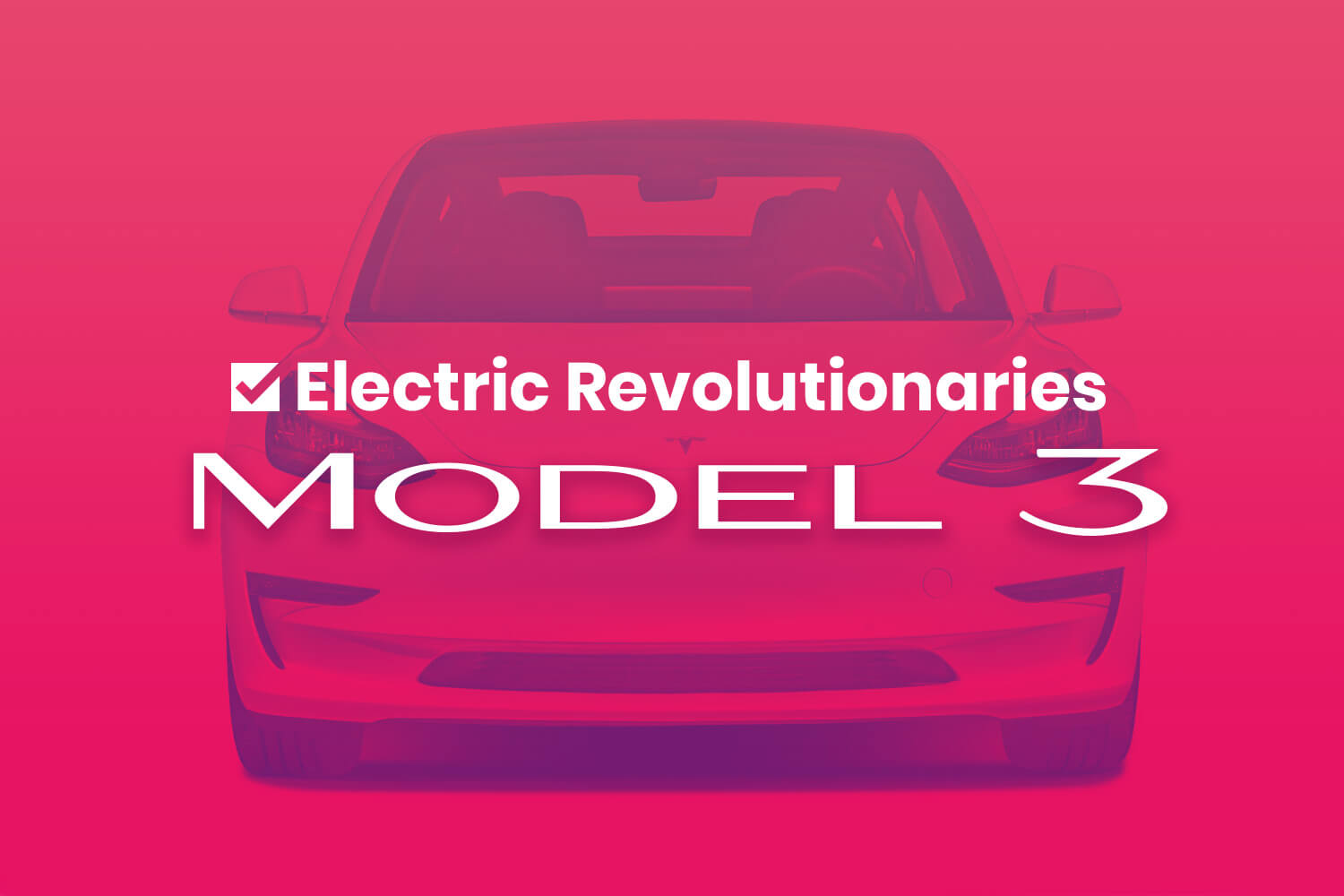 Ask a random person on the street to name an electric car and there’s a decent chance they’ll name-check the Tesla Model 3. And that’s hardly surprising. Since 2020 the Model 3 has been the world’s best-selling electric car.

And that’s a crucial factor to its meteoric success. The LEAF was popular, but it never managed to transcend its niche as an electric car for those interested in electric cars.

The Tesla Model 3, on the other hand, managed to make itself desirable in some form to all drivers, and why since going on sale in early 2017 it has quickly become the most popular electric car in the world. A title it’s held for the last three years running. What’s in a name?

The Model 3 was part of Tesla’s plan to reduce the cost of its electric vehicles through the technological developments and profit generated by the more expensive S and X Models. Tesla originally planned to call their new low-cost vehicle the ‘Model E’.

In typical quirky fashion, this would make Tesla’s four model line-up spell out ‘S-E-X-Y’. Thankfully, Ford put the brakes on Musk’s marketing plans with the news that it held a trademark for ‘Model E’. Which, frankly, was just as well.

Dodgy marketing plans aside, Tesla struck gold with it’s low-cost strategy. Within a week of unveiling the Model 3 Tesla had taken 325,000 reservations amounting to potential sales of over $14 billion. Most impressive was the fact that 93% of reservations were from drivers who did not currently own a Tesla. The three factors of success

The Model 3 managed to capture the desire of the driving public in three key areas: Acceleration, Range and Technology.

Critics might argue there are other factors that are central to capturing buyer mindshare, but when it comes to marketing, it’s all about the sizzle. And nothing appeals more than a fast car that’s good for long journeys and is packed full of cool tech that you can wow your friends with.

Let’s take a look at these three key factors:

Acceleration
0-60mph in just 3.1 seconds. That’s right – The Model 3 is blindingly fast. To put that into perspective, that’s just 0.4 seconds slower than the £139k Porsche Taycan Turbo S. Even the entry-level Model 3 Standard Range Plus will do 0-60 in just 5.3 seconds effectively incinerating any hot-hatch peddle-twitchers that might pull alongside it at the traffic lights.

Range
The Performance Model 3 offers a seriously impressive 352 miles of WLTP rated range. That covers about 99.9% of all journeys an average driver will make. And with exclusive access to Tesla’s 25,000 strong Supercharger network, it’ll go an additional 172 miles with a quick 15-minute charge. That’s an incredibly attractive proposition for drivers who are still hung up on range anxiety.

Technology
The Model 3 is more sci-fi than Star Wars. Enhanced Autopilot and Full Self-Driving capability on motorways including the ability to join and exit autonomously using on and off-ramps, the ability to summon the Model 3 from its parked location to wherever you are standing (alongside wide-eyed friends most likely), Sentry Mode that uses 360-degree camera system that monitors for car park bumps or malicious access and of course, Tesla’s pièce de resistance: it’s amazing 15-inch tablet touchscreen featuring high-definition camera views, navigation and the ability to watch Netflix when you’re parked up.

These three factors combine make the an incredibly appealing package that has managed to woo drivers from the comfort of their traditional fossil fuelled runabouts. It’s about more than just the drive

Electric cars seem almost inevitable these days, but Tesla managed to capture the public’s imagination in a way no other manufacturer has managed until very recently.

when Martin Eberhard and Marc Tarpenning founded Tesla in 2003 their aim was to be a car manufacturer that was also a technology company. Almost 20 years on, the original founders are long gone, but Tesla’s dominance is a direct result of that original aim.

Elon Musk continues to define what a modern car manufacturer needs to be to succeed in this electric renaissance. It happened before when technology company Apple revolutionised the mobile phone industry and Tesla has disrupted the entire automotive industry in much the same fashion.

It’s the technology – not the driving experience – that has been behind Tesla and the Model 3’s success. It has forced the rest of the car industry to accept that for many, cars are, rather ironically, no longer about the drive but about the technology.

If that doesn’t make the Model 3 revolutionary, we don’t know what does.

This entry was posted in Other on October 15, 2021 by Kevin Blackmore