Help keep the lights on with Audi and Grid-Optimised Charging

If you are one of the lucky drivers to be leasing one of Audi’s electric e-tron models, then it won’t be your vehicle that’s overloading the electricity grid.

Which is useful to know as there are fears that as more and more electric vehicles are leased, drivers wishing to charge them at night will place an undue strain on the electricity grid.

Rather like so-called ‘TV pickup’ – when there’s a surge in demand for electricity during a scheduled break in a TV programme and people rush to put the kettle on for a cup of tea or coffee – drivers coming home from work and plugging in their charging cables may possibly create the same effect. A case of plug-in pickup, perhaps.

It might sound slightly fanciful, but the concern is real, nevertheless. Not now, but certainly in the future as an increasing number of electric vehicles are leased or purchased. A report by the Government’s Electric Vehicles Energy Task Force says smart charging will be essential if blackouts are to be avoided.

Which is where Audi comes in.

While many electric vehicle brands already have the ability to use smart charging – only using electric to charge a battery at times of identified low usage such as during the night – Audi has gone one further. It has been testing grid-optimised charging through a simulation test involving an overload scenario in the local power grid resulting from multiple electric cars charging simultaneously.

Grid-optimised charging stops the potential for local electricity blackouts and allows dynamic charging in real-time. During periods of peak demand, the car can ‘talk’ to the grid operator. In practice, this allows delayed charging, taking into account when you plan to depart and the actual load on the power grid.

A Smart Meter Gateway (SMGW) either to the home energy management system (HEMS) or directly to the charging system enables the ‘conversation’ between grid and car to take place. 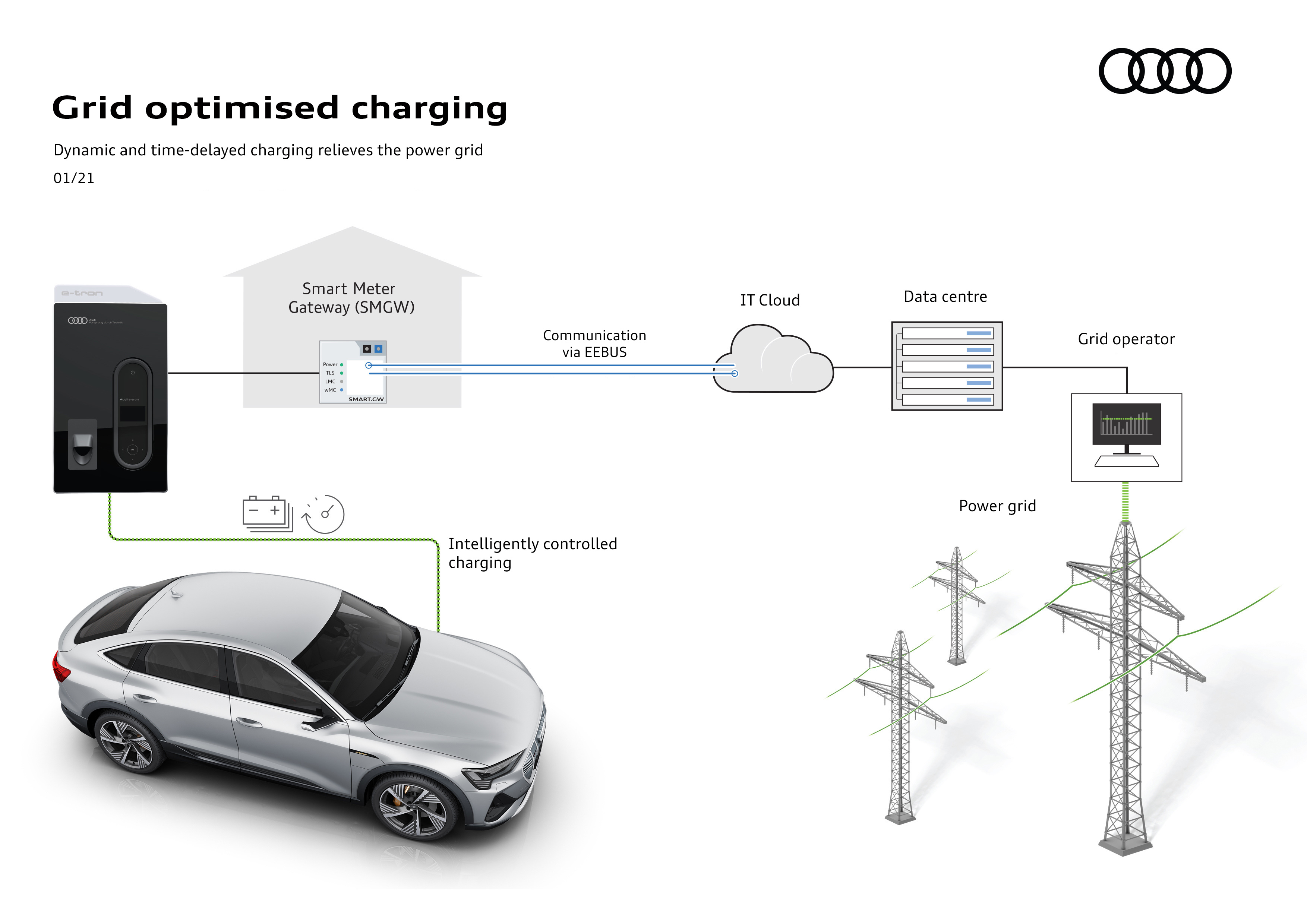 This allows the charging capacity of the Audi e-tron or Audi e-tron Sportback to be reduced as required – up to 11 kW as standard and by up to 22 kW upon request. Both models are already equipped with the necessary intelligence, and Audi says its future electric models will have this ability as well.

So the cars use electricity downtime to charge, which relieves pressure on the grid, without compromising a driver’s mobility. Such intelligent charging is the future, says Audi. This may include the ability of vehicles to store excess electricity, for example – such as wind-generated power during high wind periods – allowing it to be discharged when needed during periods of low electricity production. This is known as Vehicle2Grid (V2G) technology and helps smooth energy production and storage.

It’s another smart role for the electric car of the future.

In the meantime, rest assured that any electric Audi you lease from IntelligentCarLeasing.com will be suitably future-proofed. And will help keep the lights on in the process.

This entry was posted in Electric Car News on January 25, 2021 by Marc Murphy