How Tesla went from fast to absolutely bonkers

When Martin Eberhard and Marc Tarpenning founded Tesla in 2003 their aim was to be a car manufacturer that was also a technology company. Almost 20 years on, the original founders are long gone, but Tesla’s dominance in the electric car space is a direct result of that original aim.

And it’s this approach to technology that has made the electric vehicle – thanks to Tesla – not only viable but, more importantly, desirable.

The Model 3, now the most popular electric car in the world, has cemented Tesla’s position as the global leader in electric vehicles. And where they lead, all other manufacturers now follow.

What, then, is Tesla’s formula for success? Technological ambition and ability obviously, but there’s another key ingredient: excitement.

Musk has taken a leaf from the Steve Jobs’ playbook and turned product launches into an art form. And while they don’t always go to plan, such as the famous ‘unbreakable’ Cybertruck window affair, the public still lap it all up. Would Volkswagen have had the bravery to unveil a weird looking truck straight off the set of a cheesy 70s TV sci-fi show only to deftly announce it had a 500-mile range and that its tri-motor AWD drive could rocket it from 0 to 60mph in less than 2.9 seconds?

You just couldn’t see it happening. Traditional manufacturers are not the showmen in this new technology-driven age.

Ultimately, news of the Cybertuck’s whacky design resulted in a 6% drop in Tesla stock, but a quarter of a million pre-orders later, it’s clear that it’s the technology – not the truck – that gets the buying public going.

And that’s Tesla’s secret formula right there: make it bonkers and people will want it.

So let’s just quantify bonkers for a moment. BMW impressed early on with its i8 supercar which entered production in 2014. It’s a classically exotic supercar with the sprinting stats to match: 0 to 62 mph in 4.4 seconds.

Tesla’s funky-looking sci-fi pickup blows the doors off the i8, however, with 0 to 60 in less than 2.9 seconds (plus it’s made of bullet-resistant sheet metal, obviously).

And with those 250,000 pre-orders already tucked away, comfortably sees off the entire production run of the i8, which ended in 2020 at just over 20,000 units. With Tesla, you certainly get plenty of bonkers bang for your buck. And that brings us to Tesla’s latest, wildest product yet – the Model S Plaid. Let’s get started with a few Plaid stats:

The list above is the recipe for Tesla’s secret formula: a feature set of insane tech specs that makes the car a mouth-watering proposition. It doesn’t have the cachet of a Ferrari, but it’s a hugely exciting, headline-grabbing car. Former US talkshow host and car enthusiast, Jay Leno, proved just how exciting recently, breaking a world record in the Model S Plaid, covering a quarter of a mile in just 9.25 seconds. According to Motor Authority, that’s quarter of a second faster than a Bugatti Chiron Sport and only 1.13 seconds behind the Czinger’s 21C hypercar – which is so exotic that it’s limited to a production run of just 80.

There’s yet more craziness if you then consider the practicality and value the Tesla represents compared with its quarter-mile rivals. For example: 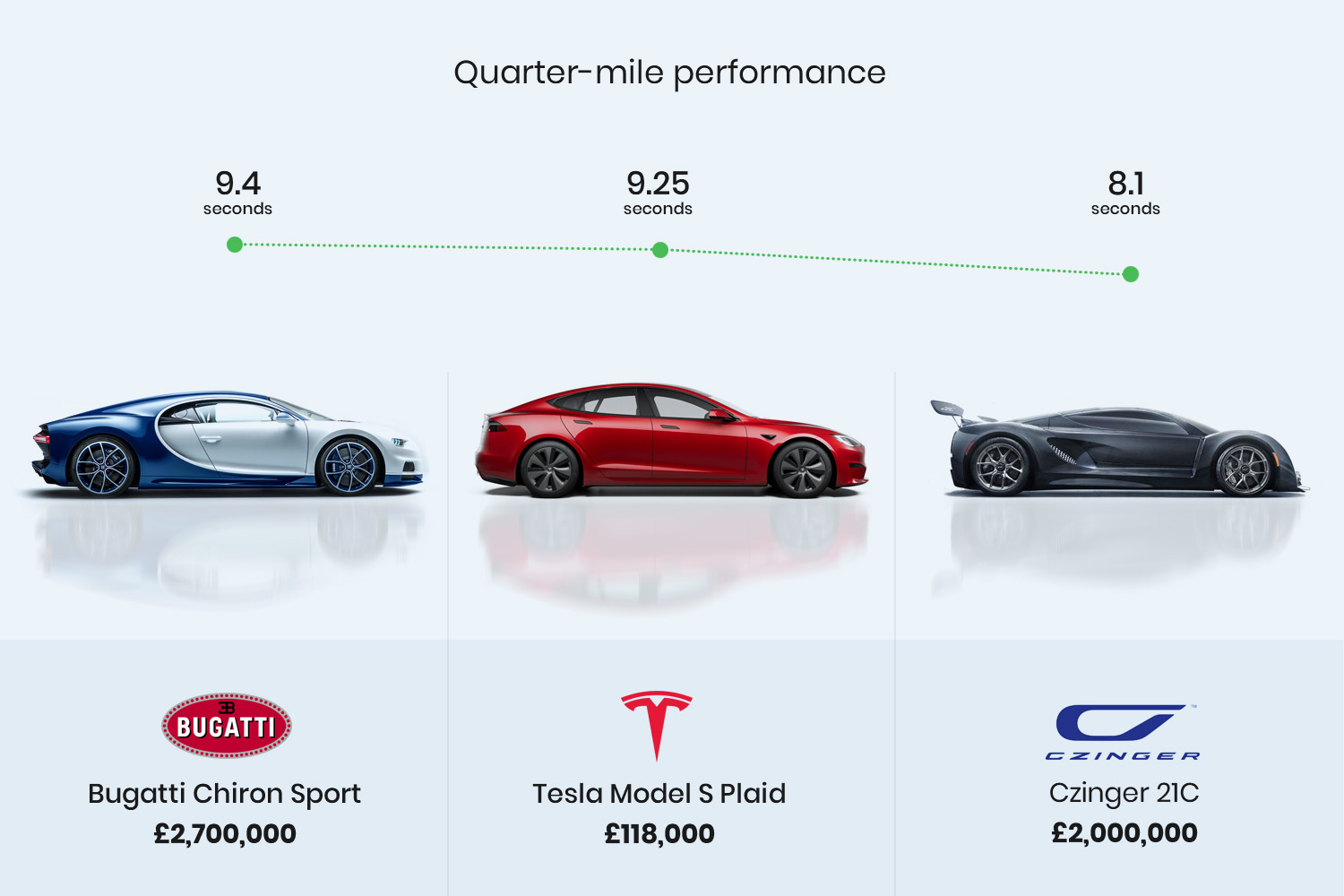 The Model S Plaid is an order of magnitude cheaper, yet offers comparable performance and is a bonafide family car. How crazy is that?

While £118k is a lot cheaper than most other exotics, it’s hardly pocket change. But don’t worry – Tesla has you covered there, too. The Model 3 Performance offers equally mind-bending specs for almost half the cost. 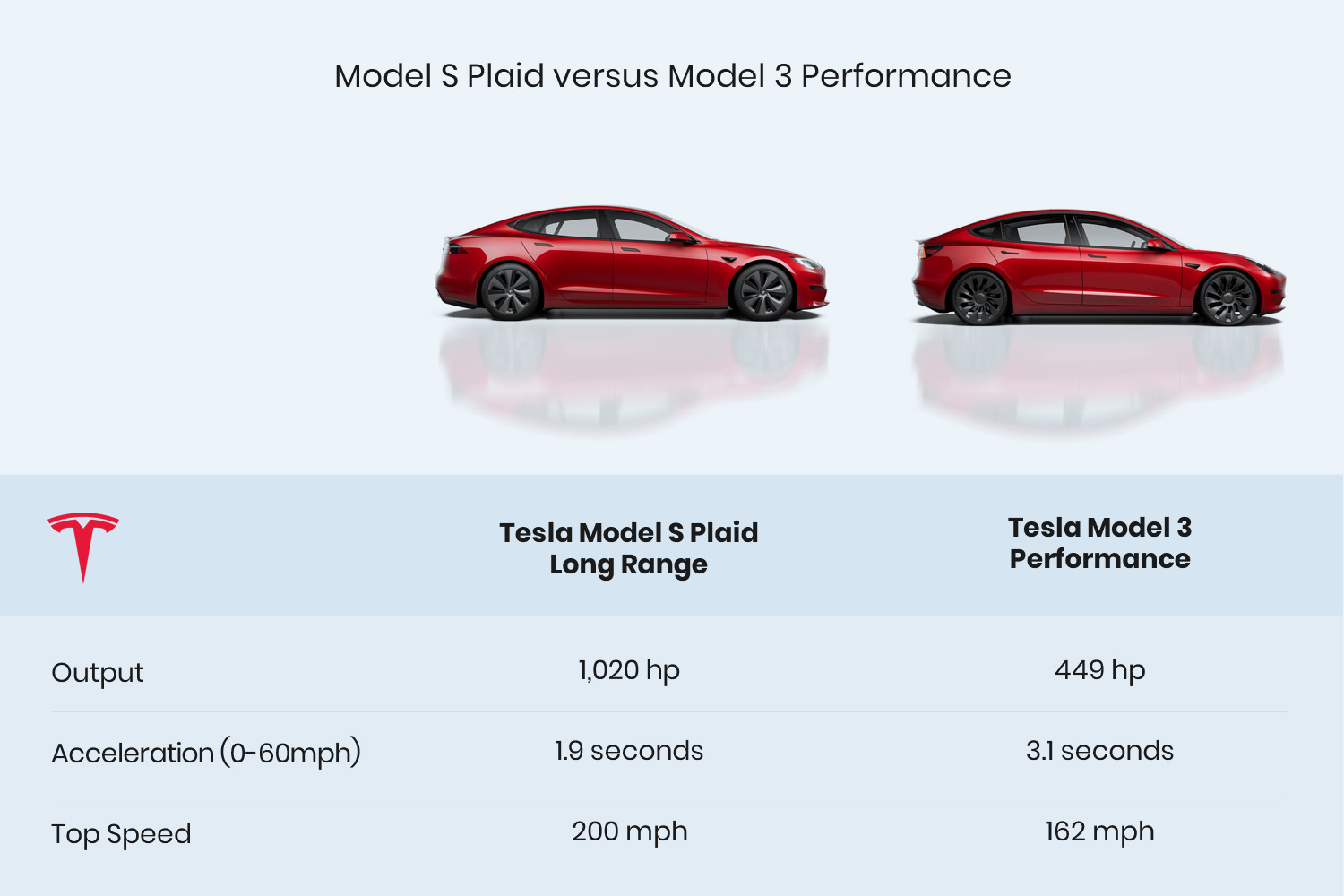 Next to the Model S, the Model 3 lags behind. But let’s put this into perspective: the Model 3 is the world’s bestselling electric car and the 16th best selling car globally according to the latest data from Focus2Move. The Model 3 Performance is incredibly swift, yet to all intents and purposes, it’s part of Tesla’s entry-level range.

This entry was posted in Fun Car Stuff on June 21, 2021 by Kevin Blackmore