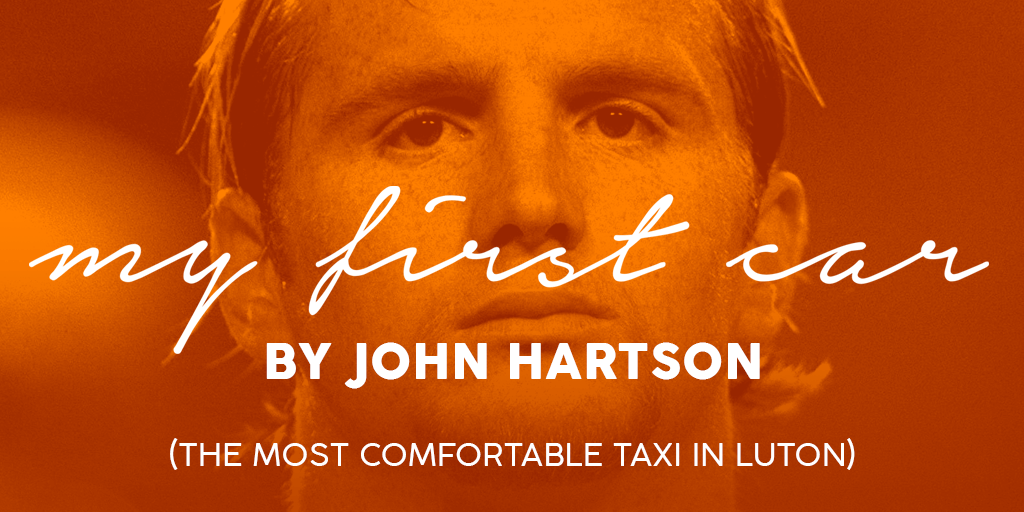 My First Car – By John Hartson

John Hartson’s first car, also known as ‘the most comfortable taxi in Luton’…
My first car was a Ford Escort, 1.6ltr engine. I bought it for £400 back in 1992 after I passed my test at the second attempt when I played for Luton Town. I sourced it from a garage in my home town of Swansea and my dad drove it up to Luton for me.

I think he had to make four or five stops en route to let the engine cool down and the black smoke to disappear!

For me, it was just great to be mobile and I loved picking up my team-mates in the morning and taking them into training. I was 17 at the time and I spent a few quid on it doing it up and put some nice, soft seats into the back seat. The lads used to say my car was like a Luton taxi.

Thinking back, it was a light brown shade and wasn’t the most pleasant on the eye, but I couldn’t have cared less.

Your first car is about enjoying the independence and freedom it gives you and it’s about getting your bumps and bruises out of the way as you improve as a driver.

I kept that car for around a year, although I’ve no idea how it managed to stay mobile for that length of time.

Over the years, as I made my way in professional football I was able to treat myself to some nice cars and I’ve been fortunate enough to have had a Porsche Jeep, Porsche Cayane, Range Rover, Bentley and a lovely Audi A8.

But there is always an attachment to your first car and just thinking about that Ford Escort right now evokes some great memories and happy times. Number of cars owned: More than 20

Dream Car: Would definitely be the top of the range, four door, Bentley, in black. Think they cost around £250,000.

Why not have a look for your dream car? We have thousands of lease deals to choose from.

This entry was posted in My First Car on May 26, 2017 by Kevin Blackmore