The Top Fomula 1 Bloopers of All Time!

F1 drivers are the finest drivers on planet Earth who operate the fastest and most advanced vehicles. However we need to remember that they are only human too. From time to time, they are just as susceptible to an embarrassing faux pas or cringe-worthy gaffe as the next man.

Over the years, the sport of F1 has yielded some hysterically comical moments, some terribly tragic ones and a good few others which were something of a mix between the two. Here are five of the most memorable in which fortunately, no one was seriously hurt.

In the 2011 Chinese Grand Prix, Jensen Button was performing well near the head of the pack and pulled in for his scheduled pitstop, only to dock in the (incorrect) Red Bull lane! Button awkwardly inched forward into his rightful McLaren station but ceded second place to Sebastian Vettel in the process. Don’t worry, Jensen, you aren’t the only one to make such a horrendous mistake – Lewis Hamilton made a similarly unwelcome return to the McLaren dugout after forgetting he’d switched to Mercedes in 2013, while Giancarlo Fisichella and David Coulthard have made similar gaffes in the past.

4) “I’m Sure We’re Forgetting Something…”

Eddie Irvine must have been exasperated at the European Grand Prix in 1999. Going into the race, Irvine had genuine title aspirations, but when he pitted at the Ferrari station in a commanding position, his crewmen removed four tyres… and inexplicably only re-fitted three after a last-minute decision to stick with dry treads. Whoever’s job it was to remember to bring the fourth tyre must have received a royal tongue-lashing that evening, if not his marching orders. And to be fair, at this high level of professionalism, remembering the requisite number of wheels on the car is the bare minimum that should be expected from an F1 crew member.

3) Clean Up in Aisle Three

The Canadian Grand Prix in 2008 holds regretful memories for a trio of drivers. Kimi Räikkönen, Lewis Hamilton and Nico Rosberg were at the head of the chasing pack and all pitted around the same time, with the Finn emerging slightly ahead of his rivals. Noticing the red light prohibiting re-entry onto the track, Räikkönen perched himself patiently at the end of the pit lane, quietly minding his own business. Hamilton, keen to make up ground, didn’t deign to spot the stop light and rear-ended Räikkönen, with Rosberg (who was hot on the Briton’s heels) making the same mistake and completing the three-car-pileup. Both Räikkönen and Hamilton were forced to retire and Rosberg also lost valuable time later on in replacing a wing, but eventually limped into fifth position.

2) Pride Comes Before a Stall

Acclaimed legend of the sport Nigel Mansell was cruising to an easy victory at the Canadian Grand Prix in 1991… or so he thought. With a comfortable lead over his closest rival, Mansell decided to milk the moment by taking a hand from the wheel to wave to the crowd. In his eagerness to show off, however, Mansell failed to keep the engine revolutions at a sufficiently high level. Needless to say, the car promptly stalled, leaving Mansell stranded just a few metres from the finish line. Nelson Piquet, the second-placed driver and Mansell’s arch-nemesis at the time, capitalised upon Mansell’s foolhardiness by whizzing by him – and the Brazilian didn’t miss the opportunity to give Mansell a wave in passing, either.

1) Japanese Driver is Hit by the Safety Car… Twice!

Taki Inoue is fondly remembered by F1 enthusiasts as one of the worst ever drivers to grace the racetrack. However, perhaps his most memorable moments came through no fault of his own. Firstly, the 1995 Monaco Grand Prix saw Inoue’s car give out during Saturday morning practice due to engine malfunction. While being towed from the track on the back of a truck, a safety car inexplicably blindsided the truck and flipped Inoue upside down – fortunately, he’d had the foresight to keep his helmet on, or things could have taken a decidedly more tragic turn.

That’s not where the shambolic charades end for Inoue, either. Just months later, he was competing in the Hungarian Grand Prix when his car became ignited. He promptly pulled off the track and gesticulated furiously to the crewmen to extinguish the flames, who seemed far more relaxed about the situation than the diminutive Japanese. Unhappy with their efforts, Inoue wrestled the extinguisher off one of the men and raced back to put out the blaze himself – only to be cut down to size by a safety car whose eyes clearly weren’t on the prize. What bad luck!

Fortunately, Inoue was able to see the funny side, telling Top Gear magazine in an interview years later: “Bang! Someone hits me very hard. But I landed on my feet, very good, perfect landing, I think nine-point-nine-nine.”

The Commentator that Keeps on Giving 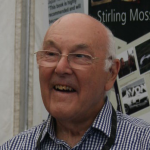 No compilation of F1 gaffes would be complete without an honourable mention of the man who made himself part of the fabric of racing without ever getting behind a wheel. The name of Murray Walker is synonymous with F1, and a career which spanned decades produced more side-splitting foot-in-mouth moments through his commentary than anything which happened on the track itself. For the full list of hilarious Murraysisms, check out this great article – but here’s a taster of the man’s talents for you below:

“You might not think that’s cricket, and it’s not, it’s motor racing.”

“I don’t make mistakes. I make prophecies which immediately turnout to be wrong.”

Oh Murray! Come back. All is forgiven.

This entry was posted in Fun Car Stuff on September 10, 2015 by Kevin Blackmore