The UK’s Hate for Traffic Wardens is Dying Down – New Study Reveals.

Back in 2004 (which seems a long time ago now) the job of traffic warden was revealed as the most hated by the UK public. It makes sense doesn’t it? The entire working day of a traffic warden is spent scouting out motorists who they can dish out irritating fines to. You’re never going to become a national treasure with an occupation like that!

However it’s now 2015 and we couldn’t find any recent studies that looked into the level of respect (or lack of) for our ticket distributing foes. Do traffic wardens still hold the title as Britain’s worst job in the public’s eye? Intelligent Car Leasing’s new survey finds out.

We asked 1000 UK adults out of the following professions which they respected the least (in a randomised order each time):

These 5 jobs were selected by looking through numerous articles collating the “most hated” and “least respected” jobs by the British public.

Surprisingly the tables seem to have turned completely; with some other notoriously unpopular jobs topping the list this time round in 2015. In fact traffic wardens came dead last in this survey with only 8% of respondents saying that it was the job they respected least out of the 5 available options. 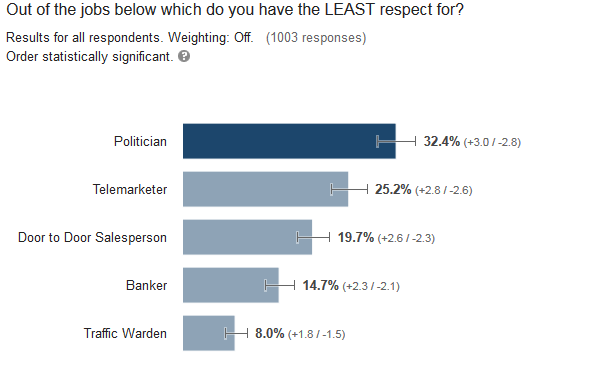 Why has the public changed its mind?

Things have definitely changed in the UK over the past 10-11 years as you would expect. However a drastic turnaround of people’s opinions on a subject as irritating as traffic wardens is a surprise. It’s most likely a combination of the factors mentioned above which has driven this change (no pun intended). Also as a final note, it is worth knowing that any tickets you get during a car lease contract may go to the finance company direct as they are still the registered owner of the vehicle.

What would you have chosen as your least respected profession from the list above? Let us know in the comments section.

This entry was posted in Reports & Research on March 24, 2015 by Marc Murphy