Having your car stolen is a devastating experience, one which the majority of us will hopefully never have to encounter. Car theft can have so many negative consequences for drivers including costly insurance excess fees, rising ongoing premiums and also a major dent to your sense of personal security/safety.

Exclusive new research from IntelligentCarLeasing.com reveals the areas in England and Wales with the highest car thefts per head. That is the amount of cars which are stolen in relation to the population of that area; giving a fair method of comparison between districts.

In this report we’ll be covering the following areas:

Intelligent Car Leasing surveyed all of the Police forces in England and Wales via freedom of information requests, asking for the number of vehicles being reported as stolen for each year from 2003-2013. Unfortunately due to changeovers in data recording systems and other factors the earliest date range we could compare all forces from was 2009-2013 which you see the results for below.

All police forces responded apart from Dyfed-Powys in Wales; as they would of had to manually searched through all 10 years worth of records, which was understandably too much of a strain on staff resources.

Because these results are based on a per head calculation the population size and density won’t have a direct influence on results. So what this reveals is that you’re statistically more at risk of having your car stolen in densely populated urban areas than quieter rural environments.

The good news is that car theft is on a continual and long term decline across the country. When taking an aggregated total of all the complete data sets collected from 2003-2013 there is a clear and promising pattern that car thefts are getting lower every single year. 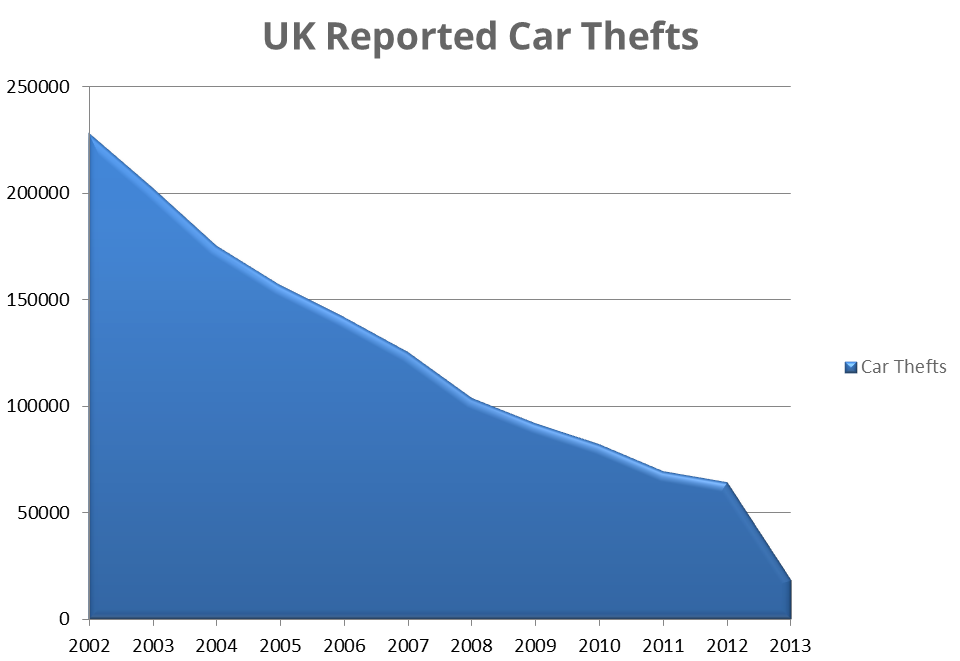 We asked leading car expert Jason Lancaster, editor of AccurateAutoAdvice.com, why this trend might be occurring. He offered the following insights as to why automotive thefts have fallen off in the past 10 years (in order of influence):

1. Computer-chip encoded ignition keys – The keys have a chip inside them. The chip has a long random code (32 or 64 digits), and the car is programmed to look for this code in whatever keys are placed in the ignition. If the code isn’t present (or if it’s the wrong code), the vehicle’s computer stops the starter from working.

So, even if someone makes a carbon copy of an ignition key, they can’t start a car. This technology debuted in the mid 90’s, and was present on all vehicles by the mid 2000’s. It has single-handedly put an end to “hot wiring,” as it takes a diagnostic computer and 10 minutes to change the engine’s computer to accept a new code. That’s an eternity for most car thieves.

2. The market for “recycled” auto parts has changed – In the “old” days, thieves would often steal cars to part them out. They could strip a stolen car of all parts in a couple of days, then sell the parts as used or “recylcled” at swap meets, pawn them off on corner mechanics, etc.

This practice of “chopping and parting” old cars doesn’t work nearly as well today because:

A) There’s a never-ending supply of new (and very cheap) auto parts from China, and that has driven down prices for used parts substantially. It’s just not that profitable to part old cars.

B) Legitimate used part sellers (junk yards, for the most part) have gotten much better at selling their parts online. Now it’s possible to go on the Internet, find a junkyard that has the used part you need, and get it delivered to your door. That wasn’t really feasible 20 years ago when the market for stolen auto parts was still strong.

C) Many factory parts have serial numbers now, which means their origins can be traced. If, for example, law enforcement finds rented self-storage units full of used auto parts, they can “run” the numbers they find on the parts and trace them back to a stolen vehicle (with help from the vehicle manufacturer, of course).

As a result, the risks of selling auto parts with suspect provenance are much higher.

3. It’s much harder to disguise and resell stolen vehicles – Before the computer revolution, it was possible to steal a car in one community, change the VIN number on the vehicle (say, by replacing it with a VIN from a vehicle that had been junked or salvaged), and then legally register the car as property.

A thief could steal a car, buy a salvage/junk car for a small fee and then use the VIN from the junker on the stolen car. The net result was with a legitimate VIN and poor documentation, a stolen vehicle could be made to appear “legit.” Then, it could be sold for a tidy profit to an unsuspecting buyer. However, this is nearly impossible to do today, as VIN numbers are tracked all over the world. It’s no longer possible to “wash” a stolen title as described above.

North versus south, it’s one of the oldest rivalries in England and is one which is based on a wide range of social and economic differences. With car theft data gathered for at least 5 years for every police force in England, it seemed a shame not to compare and see who had more car thefts per head.

The results are as follows: 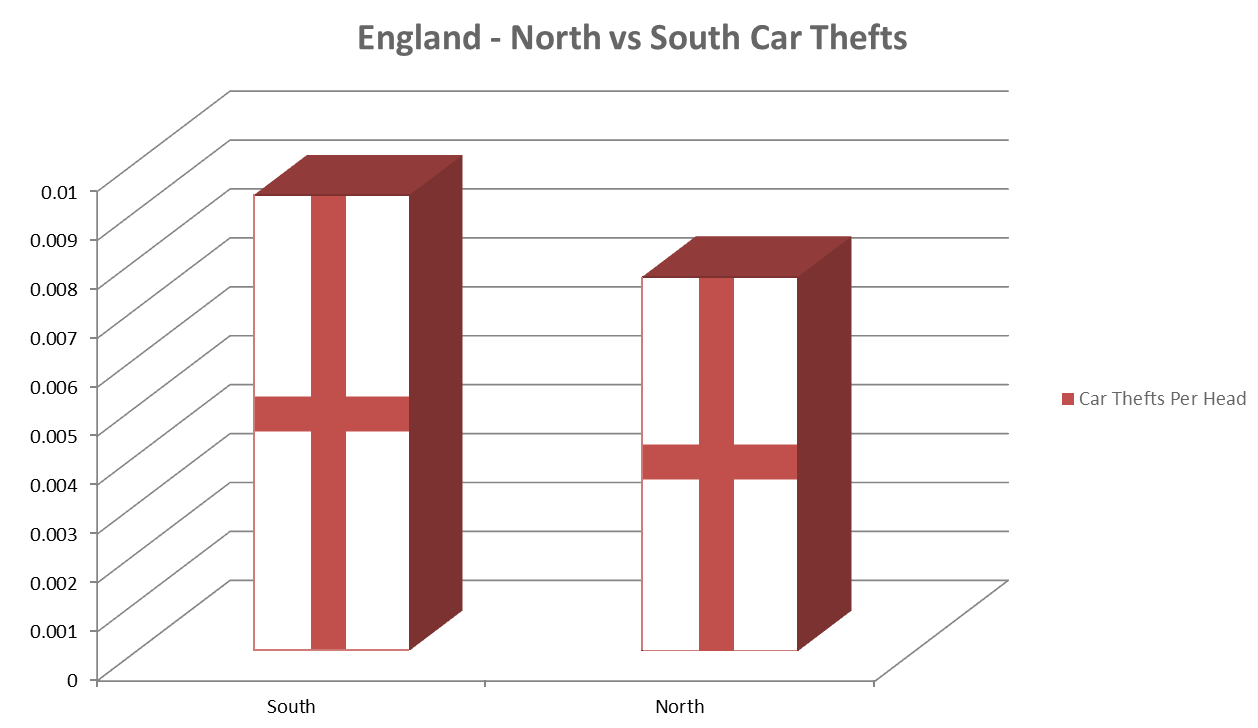 The south of England had 4.89% more car thefts per head in the past 5 years compared to the north of the country. This is an interesting statistic as the North of the country is economically poorer and under such conditions crime rates are typically higher.

However the south’s higher rate of car thefts is being inflated hugely by the City of London figures. The City of London was number 1 in the overall results for vehicle thefts per head, over 2.67 times higher than Greater Manchester in 2nd place. Therefore it can be seen that this area plays a significant part in the statistics for the south of England as a whole.

What to do if your car is stolen

It doesn’t matter whether you have a lease car or own the car yourself, the first thing you should do if you discover that your car has been stolen is contact your local police constabulary. The next step is to get in touch with your insurance provider, letting them know of the situation and preparing them for any expenses that they may have to reimburse further down the line.

How to Avoid Being a Victim of Car Theft

Even though the rate of car theft is on the decline in the UK it doesn’t mean you should be complacent about taking preventative measures. Making things easier for car thieves will only increase your risks of being a victim of car theft. Intelligent Car Leasing offers the following advice to lower your risk and help keep your car safer:

If you’re interested to find out more you can download a full copy of the results for every Police force surveyed in this study.

We kindly ask that if you refer to, make use of or republish any of the results from this study you attribute IntelligentCarLeasing.com as the original data source.

Any journalists interested in publishing these results can download the following press release which has all the key statistics and findings in a condensed format.

This entry was posted in Reports & Research on September 24, 2014 by Marc Murphy