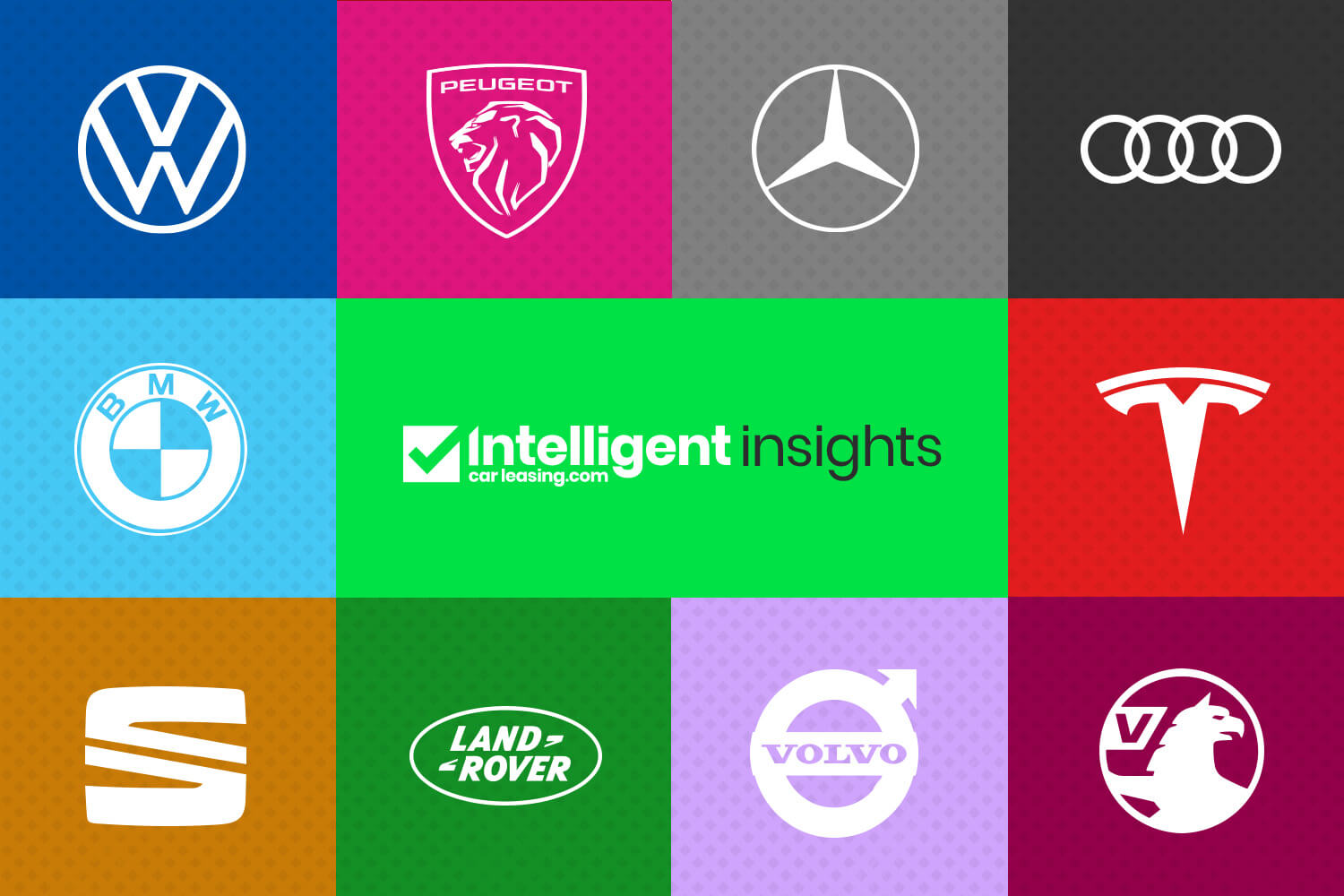 When it comes to cars, the badge is a huge part of the decision-making process. Brand loyalty, brand snobbery, call it what you will, it’s one of the first decisions we make when choosing a new car – whether we’re conscious of it or not.

Pragmatic drivers tend to choose a brand based on their reputation for reliability – such as Lexus who have topped the AutoExpress Driver Power rankings for the last four years running. Whilst the passionate dreamers among us might opt for something more exotic like Porsche, or wallet permitting, Ferarri.

The faithful typically love a brand for brand’s sake, such as BMW’s rear-wheel-drive fans, whilst the loyal might stick with a brand because that’s the badge on the hot-hatch of which they are a club member. And sometimes it’s just fondness because that MK1 Golf was the first car you ever owned, and those rose-tinted specs mean you’ll never drive anything else but VW.

Ultimately, we all have our own reasons for preferring one brand over another, and that broad spectrum of shifting tastes is why brands rise and fall with the times.

So how have car brands fared with Intelligent Car Leasing customers over the years?

Based on total orders from 2016 – 2021 year to date (YTD), Mercedes comes out as the brand of choice for our customers. That’s hardly surprising given it’s such a long-established and respected marque. Leasing has always provided a cost-effective way for a driver to step into a prestige brand, and the Mercedes A Class has been an incredibly popular choice with many ICL customers. BMW takes second place, but the appearance of Peugeot in third, a position driven in no small part by its ultra-popular SUV range, shows that preference isn’t dictated by badge status alone.

So that gives us an idea of overall brand preference, but let’s dig a little deeper and look at how the top ten brands in 2016 have faired over the ensuing six years. Spoiler: Our favourite American disruptor brand is about to make its big entrance.

Now we have an idea of our customer’s favourite brands over the period 2016 – 2021, let’s take a look at the popularity journey those brands have taken.

Despite sitting in seventh place in the overall popularity rankings, in the yearly rankings, Nissan has fallen out of the top 10 for the first time since 2016. Volkswagen has proven that brand loyalty is everything after successfully weathering the dieselgate scandal with a steady rise from ninth place in 2016 to first in 2021 so far. Peugeot has had a bumpy ride, but after dropping out of the top 10 in 2019 its experienced an impressive comeback and now resides in second place.  Other brands that have experienced consistent success include Kia, Land Rover and of course, BMW.

But there’s only one story here – the meteoric rise of Tesla. In the overall popularity rankings, Tesla languishes in 17th place – 14 places behind Mercedes. But let’s put that into perspective. Mercedes has been a permanent resident in the upper half of our top 10 most popular chart for the last six years running. It’s been manufacturing cars for over 95 years. It produces a broad range of vehicles across many classes and enjoys a reputation as a global prestige brand.

Tesla on the other hand sells a grand total of four all-electric models into a market that – in the grand scheme of things at least – is still relatively niche. In addition, Tesla produced its first mass-market EV just nine years ago.

But just take a look at the brands’ trajectories over the last six years: 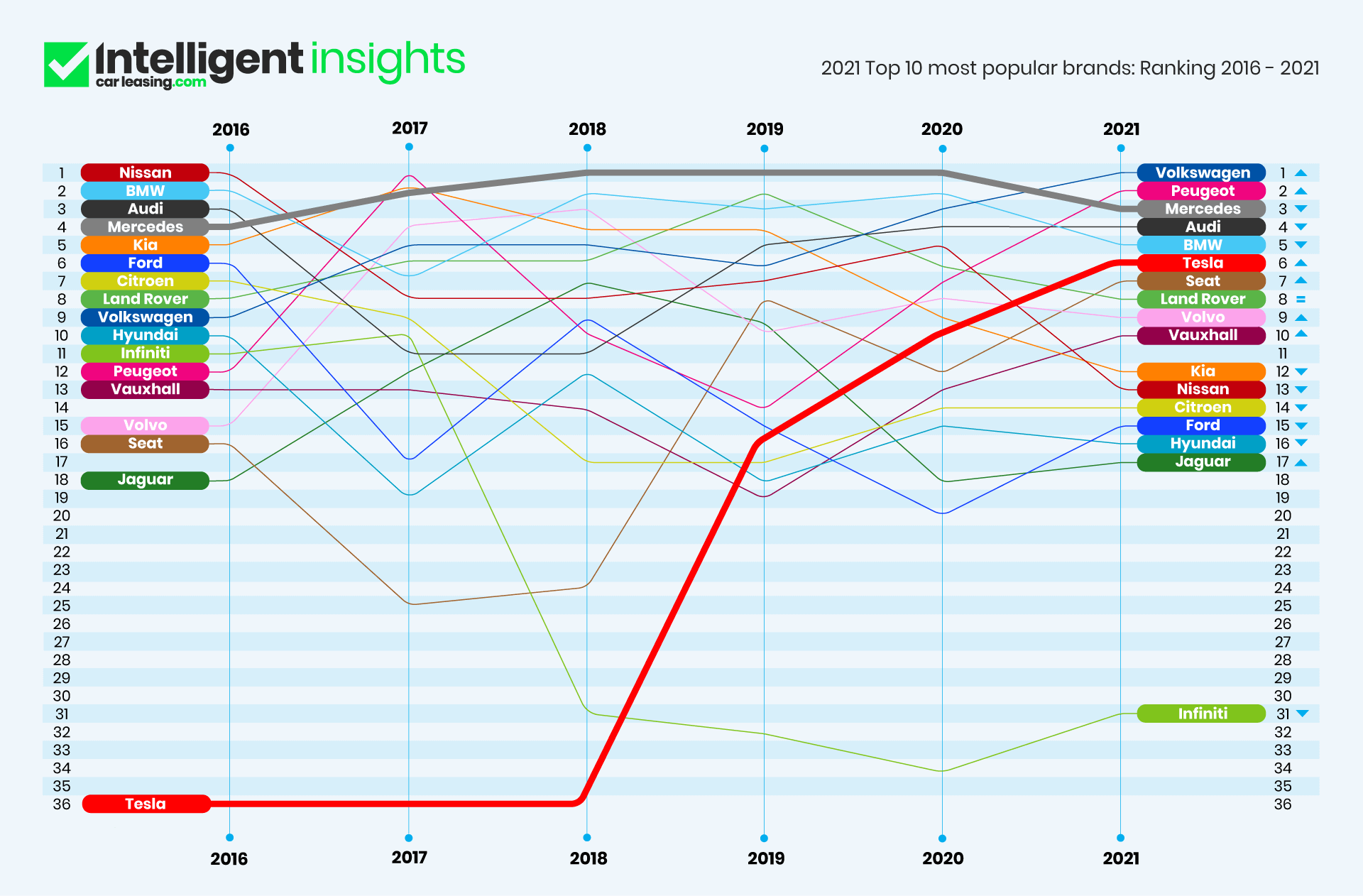 Tesla started making an impression on our most popular rankings in 2019 and since then has rocketed up the rankings. If we take 2021 so far, Tesla is sitting only three places behind Mercedes in terms of popularity. That’s quite a performance.

And it’s all down to brand. Tesla engenders great passion amongst its brand believers. It appeals to the tech-savvy new kids on the block who are helping make Tesla, not just one of the most popular car brands but one of the world’s fastest-growing brands, period.

But it’s also down to the electric vehicle revolution. Established manufacturers are scrambling to re-engineer their line-ups. Mercedes’ all-electric EQ range, featuring the EQA, EQC and forthcoming EQS models, are a direct result of Tesla’s domination of the electric vehicle market.

Only a fool would bet against Mercedes in the long-term brand popularity stakes, but the times – and tastes – are obviously changing. What will the next six years hold?

This entry was posted in Intelligent Insights on July 5, 2021 by Kevin Blackmore