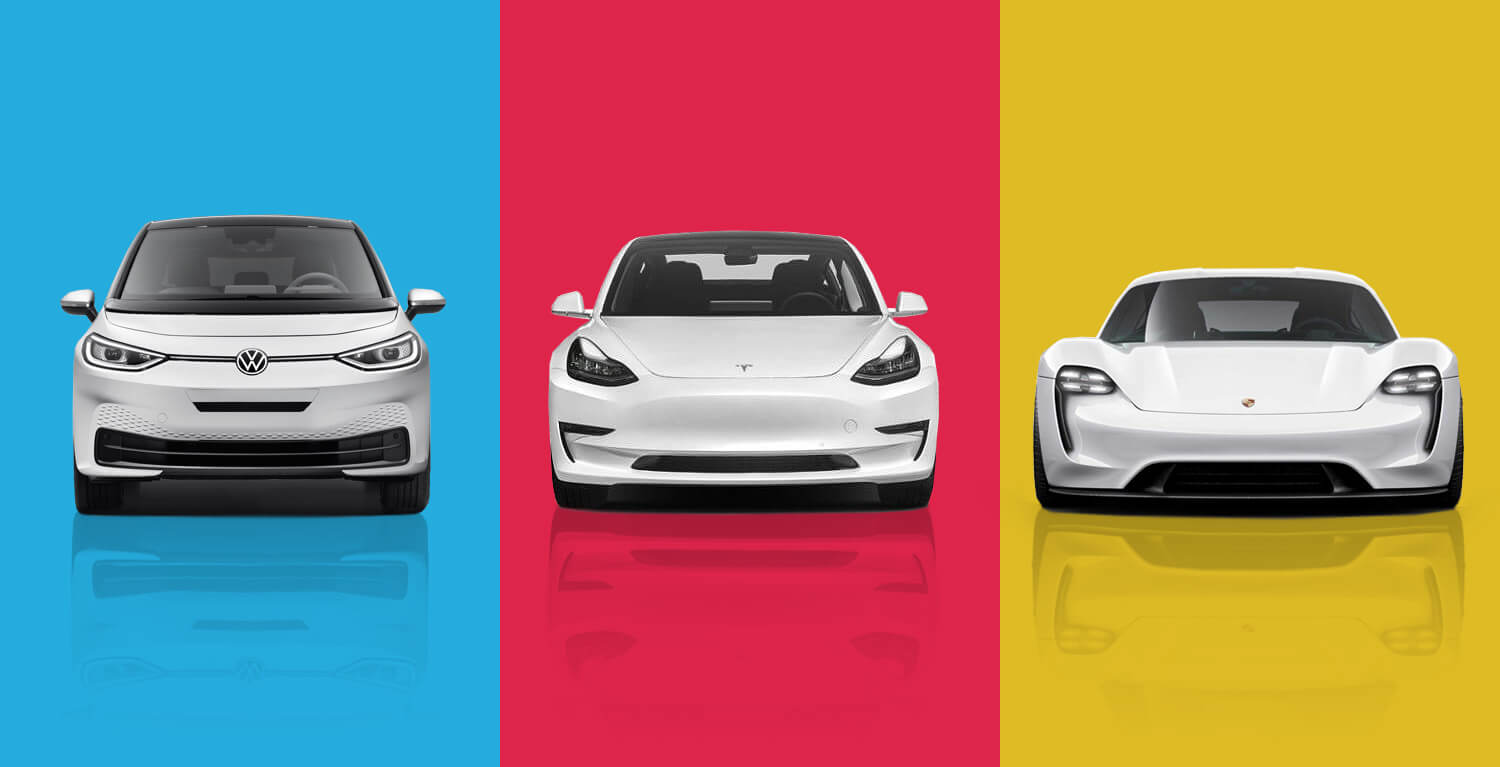 The Volkswagen ID.3 – is it a match for luxury electric rivals?

2020 was a year full of uncertainty. However, at Intelligent Car Leasing, one thing is for certain. The demand for our electric vehicles (EVs) is growing.

Drivers are flocking to electric and plug-in hybrid cars and the EV market is showing no signs of slowing down. Over 108,205 battery electric vehicles (BEVs) were registered in the UK between December 2019-20. Incredibly, 21,914 of BEV registrations were in December 2020 alone. That’s an increase of 185.9% from last year according to the Society of Motor Manufacturers and Traders (SMMT).

Today, one new EV is registered every three minutes. Gone are the days when choice was limited to just one or two vehicles. Today, there’s a growing variety. In fact, there are very few manufacturers that do not have an electric model in their line-up.

Have we got you thinking green yet?

Porsche is currently riding high with the launch of their first all-electric production model, the Taycan. Composed of two terms of Turkic origin, the name can be roughly translated as “soul of a spirited young horse.” –  a very apt name for a car sporting the famous prancing horse badge. Performance-wise, the current entry-level Taycan 4S can go from 0 to 62 in just 4 seconds, while it’s 72 kWh battery has a range of 230 miles.

And then of course, there’s the Tesla Model 3 – a car that’s on everyone’s lips. The Standard Plus model is capable of 0-62 in 5.3 seconds and has a range of 267 miles. It topped the overall best-sellers list for two months of the year (April and December) and was the world’s bestselling EV as of December 2020. But despite the popularity, it’s still very much a higher-end EV.

Of course, luxury car brands extend beyond Porsche and Tesla. Bentley, best known for the opulent Continental GT and Bentayga SUV have announced plans to switch their model range to plug-in or battery-electric cars only by 2026. Surprised? We decided to run an online poll and interestingly, 52% of our Instagram followers were enthusiastic about this green initiative saying, “Sounds great!”

With luxury brands dominating the EV headlines, you might be forgiven for thinking that going electric is unaffordable. Volkswagen’s most recent electric model, The ID.3, is something of a revolution for the German manufacturer and a worthy challenger to the likes of the Tesla Model 3. According to Volkswagen, the ID.3 follows the Beetle and the Golf as the third major chapter for the history of the Volkswagen brand.

And it’s certainly capturing the world’s attention. Not just for its futuristic design and presence, but also for its ability to rival the prestige car brands when it comes to technology and range. And because, well it’s a Volkswagen.

The ID.3 impresses with not only its performance but its charging and mileage range too. I sense your range anxiety sensors tingling but fear not! The 77 kWh Tour model can achieve a combined range of up to 336 miles on a full charge and will push you from 0 – 62 mph in just 7.9 seconds.

The entry-level 62 kWh Life Pro model doesn’t disappoint either, with a very respectable combined range of 263 miles on a full charge. That’s greater than the more expensive Porsche Taycan! And, if you can find an ultra-rapid charger, you could be recharged and back on the road in just 30 minutes.

Now, if you’re as much of an EV fanatic as we are at Intelligent Car Leasing then you’ll know that a range above 250 miles is now commonplace for most new electric cars coming onto the market – particularly impressive for one priced under £31k.

So, let’s take a look at how the ID.3 compares with the likes of luxury brands Tesla and Porsche who are currently dominating the executive and higher-end EV space.

The ID.3 is an impressive family-sized car that packs a punch on price, and range, compared to its rivals listed above.

It’s no surprise that the new Volkswagen model features in our ‘Best Cars to Lease in 2021’ list and ranks 4th on the SMMT Best Sellers list after only going on sale in the latter half of 2020. This nimble family hatchback has also been named Small Electric Car of the Year by WhatCar? 2021 beating its key rivals – the Citroën e-C4, Kia e-Niro and the Peugeot e-208.

The ID.3 is also proving to be one of the top-selling electric cars in Norway – a country with a highly ambitious clean air policy which aims to see all cars become zero-emission by 2025. Sales have gone through the roof at 2,475 registrations in October 2020 alone compared to the next bestseller – the MG ZS EV which took just 586 registrations in the same month!

What Car? said “There are few electric cars that ride any better, unless you spend an awful lot more dosh.” And with 38,549 public charging connectors across the UK, according to Zap-Map, what’s stopping you from choosing electric?

Don’t forget, you’ll only be ‘filling up’ with cheap electricity, not expensive petrol or diesel. After just a few months on sale, the Volkswagen ID.3 really is already beginning to dominate a market where it’s the norm for long-range to come with a high price tag.

So is the Volkswagen ID.3 a match for luxury electric rivals?

It certainly looks that way as far as Tesla is concerned. For some, the ID.3 might be more to drivers’ tastes than the divisive Model 3 and it has already started eating into its market share. And, whilst it doesn’t quite hold the status of the high-performance Porsche Taycan, it certainly holds it’s own in terms of range. In fact, our marketing manager has just taken delivery of his very own Volkswagen ID.3, so we’ll be sure to let you know how it stacks up with real-world use.

Porsche and Tesla watch out, you’ve got competition!

Check out our Volkswagen ID.3 lease deals here and if you’re curious what other EVs are coming, take a sneak peek into the coolest new electric cars to hit UK roads in 2021 and beyond.

This entry was posted in Top Car Choices on March 11, 2021 by Fiona Irving